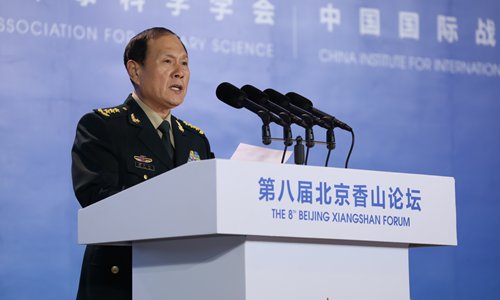 The 8th Beijing Xiangshan Forum opened on Thursday and Chinese President Xi Jinping sent a congratulatory letter to the opening ceremony to express China's commitment to enhance strategic mutual trust and security cooperation with the rest of the world.

Xi said in his letter that the international community is now facing increasing traditional and non-traditional security threats, and that the Chinese military will always be the force to firmly safeguard peace and stability of the world.

Chinese Defense Minister Wei Fenghe also delivered a keynote speech at the opening ceremony, which directly responded to recent accusations and criticisms against China made by U.S. senior officials. Wei stressed that China-U.S. military ties are important and sensitive, and that both sides should show increased mutual trust to make military ties the stabilizer of China-U.S. relations.

This is the first time that North Koreasent a delegation to the forum. Kim Hyong-ryong, the vice minister of the People's Armed Forces of the Democratic People's Republic of Korea, delivered a speech at the first plenary session.

Kim said North Korea is expecting the second summit with the U.S. to implement the agreements that both sides reached at June's first summit in Singapore.