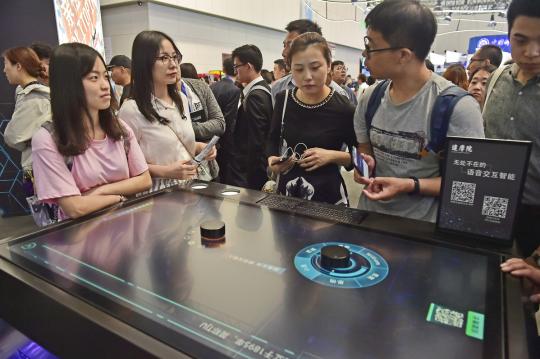 As technological winds of change sweep various sectors, the digital dimension promises to transform the economy

Five technologies－5G, the internet of things, artificial intelligence/machine learning, robotics, and cloud computing－will come to fruition over the next decade and enable the transformation of industries throughout the Chinese economy.

That was the consensus view at the latest World Intelligence Congress, an annual gathering of business leaders, government officials, and university researchers that the northern Chinese city of Tianjin has been organizing since 2017.

Tianjin was officially designated by the national government as a "National Advanced Manufacturing R&D Base" in 2014, building on the city's industrial heritage.

The 3rd WIC, which was held from May 15 to 20, attracted thousands of visitors. Experts discussed new technologies and their likely impact on the economy.

Zhang Liming, general manager of the China Hualu Group Co Ltd, a Dalian, Liaoning province-based electronics manufacturer, summed up the changes: "Now we can combine the agricultural economy, industrial economy and digital technology, so as to realize online and offline sales, thus expanding the market, reducing the intermediate links. This allows us to adjust rapidly supply and demand. So, the digital economy is not a fictitious economy, but an improvement of the real economy."

The WIC's agenda, which lists half-day and all-day forums on special topics, illustrates the widespread effects that the new technologies will have throughout the economy.

In the coming decade, businesses will have access to extensive real-time data using sensors embedded in machines. Data will also flow in through online or cloud-based information and from, for example, both airborne and underwater drones. Artificial intelligence, which should more specifically be called machine learning, will help companies make sense of the mass of data. Robots of all sorts will improve efficiency.

The new technologies will also improve the effectiveness of education and allow children outside the big cities to get equal access, according to Jin Lei, vice-president of Netease Youdao.

"AI technology can break through the space-time barrier of education. In such a large country as China, the imbalance of educational resources is inevitable and natural … Last year, we saw tens of thousands of students in poor areas of Yunnan (province) and Chengdu (in Sichuan province) who were able to attend classes (electronically) with students in the cities. Many of them have been admitted to Tsinghua University and Peking University (in Beijing) … I believe that in the future, in the most remote corners of China, the best teachers can be heard giving lectures. This can become routine, rather than a luxury," he said.