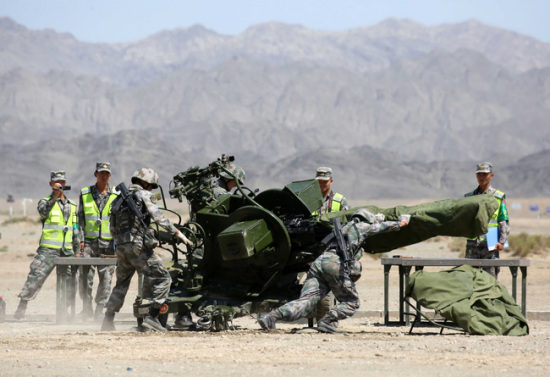 Chinese soldiers perform maintenance on an anti-aircraft artillery gun during the Gunsmith Master event of the International Army Games (IAG) 2017 on August 7, 2017. (Photo/chinamil.com.cn)

Chinese airborne troops have won first place in 11 out of 12 "Airborne Platoon" events during the International Army Games 2017, according to official results published Thursday.

The International Army Games is an important platform for air forces to learn from each other and build relationships, said Shen Jinke, spokesperson for the organizers.

China sat at the top of the rankings after winning the most gold medals, followed by Russia and Kazakhstan in second and the third places respectively.

The PLA Air Force also won four gold medals in the "Aviadarts" competition, which was held in Changchun in northeast China's Jilin Province.

The International Army Games 2017, which runs from July 29 to Aug. 12, consist of 28 competitions to be held in Russia, China, Azerbaijan, Belarus and Kazakhstan.