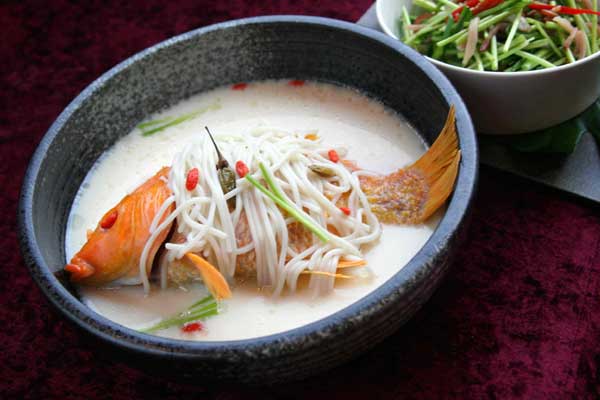 In the Unites States, you can now enjoy a high-quality, palatable invasive fish without remorse because you are helping save the environment.

Several states in the Midwest are encouraging people to eat Asian Carp to protect the ecosystems of rivers and lakes. "Asian carp have been found in the Illinois River, which connects the Mississippi River to Lake Michigan. Due to their large size and rapid rate of reproduction, these fish could pose a significant risk to the Great Lakes ecosystem," the US Environmental Protection Agency says on its website.

A team of US fishery experts visited Shanghai in September to learn more about the Asian carp market. They toured carp processing plants in Wuhan, Hubei province, and tasted local dishes, such as carp braised in brown sauce, and bread soaked in fish head soup.

Eight species native to Asia including bighead, black, grass and silver are categorized by the US as Asian carp. They were originally introduced to US water systems in the 1970s to control the spread of weeds and parasites. But their numbers grew quickly as they crowded out native fish populations, damaging local ecosystems.

According to the Beijing News, the US team hopes to enhance cooperation with China in controlling the Asian carp population in the US and rehabilitating these carp in China, where they are valued as a source of food.

Asian carp expert Jim Garvey, who led the US team, told the Beijing Times that these invasive carp have flooded into the Mississippi River and its tributaries. If their numbers are not controlled, Garvey said, the fish will soon spread to the Great Lakes, where tourism and fishing are major industries.

To many Chinese, carp are merely a source of food, not an invasive pest. Chinese people have eaten the tasty fish, which are a rich source of nutrition, since ancient times. Serving a carp whole is a symbol of prosperity in Chinese culture, and at a banquet it is customary to serve the whole fish last.