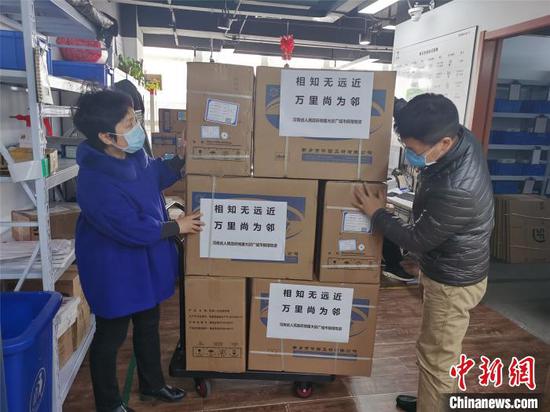 (ECNS) -- The first batch of face masks and protective medical suits collected by Central China's Henan Province was sent to South Korea on Thursday to aid its combat of the rampant novel coronavirus.

The aid materials including 400 sets of protective suits and 2,000 KN95 face masks will be delivered to hard-hit Gyeongsangbuk-do and Daegu through South Korean Red Cross.

"True friends are never separated, though they be thousands of miles apart," is written on boxes of aid materials.

2020 marks the 25th anniversary of the establishment of friendly relations between Henan Province and South Korea's Gyeongsangbuk-do.

In early March, a charity donation worth 10 million Korean won from Jeju, South Korea was sent to Qiboshan Hospital in Zhengzhou City, Henan Province to support epidemic revention and control.

Virus infection has soared in South Korea, with 7,948 new cases reported from Feb. 19 to March 12. The country has raised its four-tier virus alert to the highest "red" level.

Henan is willing to share its experience of epidemic prevention and control with Gyeongsangbuk-do and Daegu and to hold exchange events after the pandemic is contained, said an official of the Foreign Affairs Office of Henan Provincial Committee of the CPC.