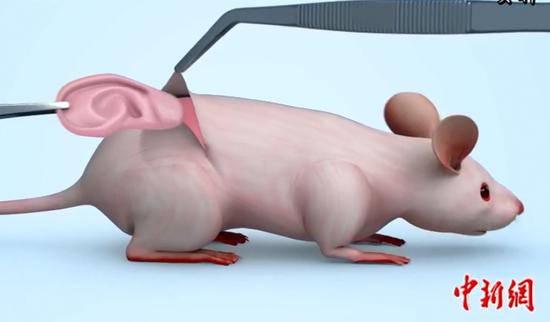 (ECNS) -- The Chinese team that constructed the world’s first ear in a lab and grafted it onto a patient last year has made new progress by developing injectable cartilage that can be used in human tissue repair and plastic surgery.

The regeneration technique involves taking a small part of cartilage tissue from behind the ear of a patient, culturing seed cells in the lab and reproducing cells in a sufficient amount to fill a biodegradable mould made by 3D-printing.

Professor Cao Yilin, director of National Tissue Engineering Research Center, said it marks a breakthrough from previous technology as the cultured cells can be injected into a patient’s body parts like the nose and chin where they continue to develop into normal tissue, a minimally invasive treatment similar to natural growth.

The technology can effectively avoid many side-effects caused by hyaluronic acid and is now used in clinical applications. It’s expected to be applied in surgeries and organ reconstruction.

Shi Junli, an instructor in cartilage regeneration, said the technology’s advantage lies in the use of a patient’s own cells so it’s safe and has little chance of rejection.