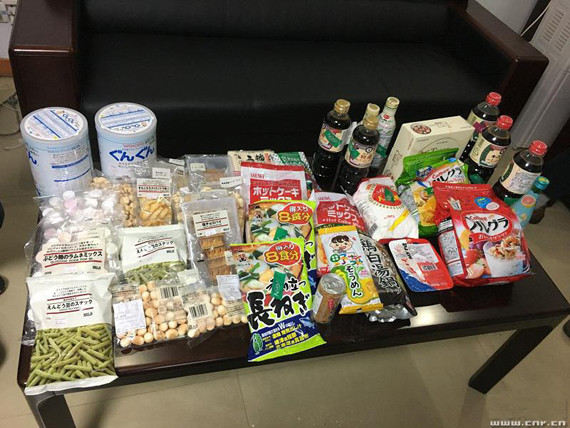 Contaminated food from Japan is flowing into China through cross-border e-commerce and overseas shopping channels. (Photo/www.cnr.cn)

(ECNS) -- Contaminated food from Japan is flowing into China through cross-border e-commerce and overseas shopping channels, despite a national ban on such products.

The market inspection watchdog in Shenzhen, south China’s Guangdong Province, found that a Calbee cereal product from a radiation affected area in Japan was still being sold on many Chinese e-commerce platforms, including JD.com, Taobao, Amazon China and Dangdang, said China National Radio.

In Shenzhen alone, about 1 million packages of the Calbee cereal have been sold on Taobao in the past five years, and there are several thousand Taobao stores selling the cereal across the nation, with monthly sales hitting tens of thousands of packages, the Shenzhen authority warned.

The annual "3.15" gala produced by China Central Television to mark Consumer Rights Day disclosed that food from Japan's high radiation-affected areas was sold in several stores, including some large Chinese e-commerce platforms, Muji stores, and Aeon stores. Some retailers hid the origin of the product by using vague labels.

In 2011, Chinese authorities ordered a ban on imports of foodstuffs, edible farm produce and fodder from about ten radiation-affected areas in Japan, following a nuclear crisis in Fukushima triggered by a devastating earthquake.

But some vendors got access to radiation-affected food from tax-protected zones to avoid customs clearance.

In February, the Ministry of Foreign Affairs issued several safety alerts concerning radiation in the Fukushima area. A ministry spokesperson said any responsible governments would continuously pay close attention to the Fukushima nuclear leak and its effects on ocean environments, food safety and human health.