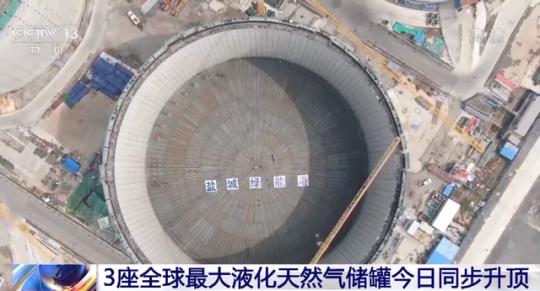 A screenshot from CCTV's program. （Photo/CCTV）

This is a milestone that China's ultra-large LNG storage tank design and construction technique and project management have achieved a world class level, it said.

The three LNG storage tanks, each with a capacity of 270,000 cubic meters, is located in Yancheng Binhai Port Industrial Park in East China's Jiangsu province. They are part of the company's LNG terminal project that includes six new ultra-large tanks and four large tanks, with a total storage volume of 2.5 million cubic meters, it said.

Upon completion at the end of 2023, the project will become the largest LNG storage base in China. The Jiangsu LNG Binhai Receiving Station will also be playing a key role in optimizing the country's energy structure, protecting the natural environment and accelerating the industrial transformation of the Yangtze River Economic Belt, it said.