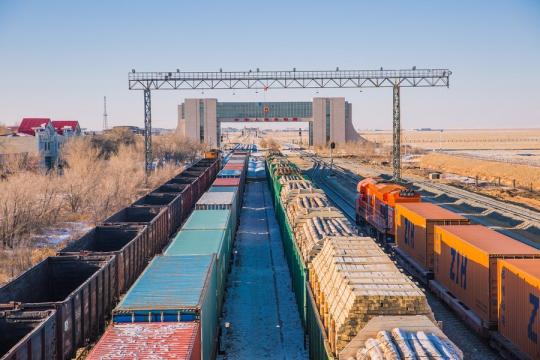 With passenger trains reduced or suspended due to epidemic control in some regions across the country, China's railway network was able to capitalize by running more freight trains in the first quarter.

More than 948 million metric tons of cargo was transported by rail from January to March, a year-on-year increase of 2.8 percent, according to national railway operator China State Railway Group.

A total of 350 million tons of coal for electricity production was transported via the network, a year-on-year increase of 6.6 percent.

The network also supplied materials used in the fight against COVID-19 to places such as Hong Kong. Thirty-five trains carrying 1,384 tons of cargo from Beijing were sent to support the special administrative region's fight against the virus.

More freight train services were put on to transport goods that are usually carried by road, including agricultural items.

With spring in full swing, China State Railway transported 43.7 million tons of agricultural goods in the first quarter, a year-on-year increase of 8.8 percent. The cargo included fertilizer, seeds and pesticides. Green channels were opened for loading and transporting the goods to make sure they arrived before harvest time.

The freight rail network also made advances in international trade from January to March.

In the first three months of the year, the network handled 3,630 freight train services carrying 350,000 containers between China and Europe, a year-on-year increase of 7 and 9 percent, respectively.

Some 170,000 containers were sent via the new western land-sea corridor, a year-on-year increase of 56.5 percent. The China-Laos Railway facilitated the flow of 260,000 tons of import and export goods, showing strong growth, China State Railway said.

There will be four extra daily freight services on the China-Laos Railway. Additionally, more freight services will be operated between China and Europe, and the number of services along the new western land-sea corridor will be increased.