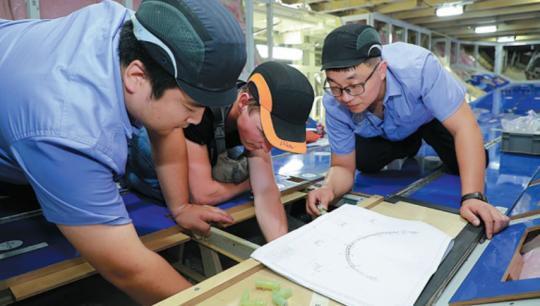 Employees of Airbus and Xi'an Aircraft International (Tianjin) Corp work together on the A320 fuselage project in Tianjin. (Photo provided to China Daily)

European aircraft manufacturer Airbus said its local partner has started the fuselage-equipping project of the A320 family aircraft in Tianjin on Tuesday.

The first China-equipped fuselage will be delivered in the third quarter of this year.

Large parts and the internal system components of A320 fuselage will be transported from Europe to Tianjin to complete the final assembly work, according to the agreement.

"Since the signing of the contract in 2019, XAT quickly set up a fuselage development team, and together with Airbus' German and French fuselage teams, we prepared a network plan for the development of the project, specifying more than 100 key process control nodes," said Ma Yan, president of XAT.

The company has had a long-term partnership with Airbus on its single-aisle aircraft wing equipment since 2009, and it has shown a good record of on-time and quality deliveries, Airbus said.

By 2024, the A320 fuselage equipping project is expected to meet its target production capacity. Airbus said the project indicates a step forward for the vertical integration of its supply chain in China, the largest market for Airbus.

The aircraft maker has delivered more than 540 planes of the A320 family from its final assembly line in Tianjin to Chinese airlines and some Asian carriers.

China is an integral part of the global aviation industrial ecosystem, and an important part of Airbus' global supply chain, Airbus said.

The Airbus A320 final assembly line in Tianjin, which has been in operation for more than 12 years and is the third single-aisle assembly line for Airbus after Toulouse in France and Hamburg in Germany, has helped Airbus increase its market share in China to about 53 percent and steal a march over its US rival Boeing Co.

Currently, more than 200 suppliers in China support the production of almost all types of Airbus commercial aircraft and cover all life cycles like manufacturing and maintenance of an aircraft.

"The latest movement shows Airbus' recognition of China's assembly skills and is important role in the global supply chain, as well as China's investment environment," said Zou Jianjun, a professor at the Civil Aviation Management Institute of China.

Last year, Airbus' annual industrial spending on the commercial aircraft business in China reached about $1 billion, representing an increase of almost 60 percent compared to the level seen in 2016, the company said.

China's domestic air travel market is steadily picking up. Last month, 51 million passengers took domestic flights, which reached 93.6 percent of the level recorded at the same time of 2019 before the COVID-19 pandemic, according to the Civil Aviation Administration of China.