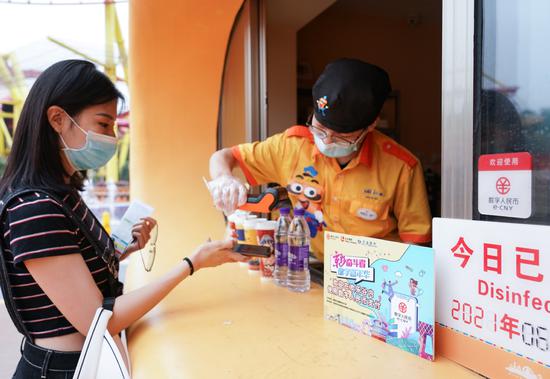 A tourist pays in e-CNY using her mobile phone at a shop in Beijing. (Photo/Xinhua)

The upcoming 2022 Winter Olympic Games in Beijing will be likely prove to be a breakout phase for China's digital renminbi, or e-CNY, one of the most important tools of the country's central bank to maintain monetary sovereignty in the digital era, an expert said in an exclusive interview with China Daily.

The Winter Olympic Games will be held from Feb 4 to Feb 20 next year, and some entry-exit points, such as the cities of Shanghai, Beijing and Guangzhou in Guangdong province, are expected to be ready for extensive use of digital RMB payments during the Games, said Li Lihui, former president of Bank of China and head of the blockchain research working group at the National Internet Finance Association of China.

Li said the digital RMB, which is backed by the People's Bank of China, the central bank, should aim to be "the world's best central bank digital currency", which will be conducive to maintaining China's monetary sovereignty and financial stability, as well as fostering integrity of the monetary system in the digital era.

The 2022 Games will be the touchstone, or a turning point, for the digital RMB, he said. "I am full of confidence."

But, in the short term, the digital RMB is unlikely to change the existing US dollar-dominated global monetary system much, as it is only a replacement for part of cash in circulation, a retail type of CBDC, Li said. "If it is to be a globally-used CBDC, the digital RMB should become a wholesale type of digital currency."

Zhou Xiaochuan, former governor of the PBOC, said in his keynote speech at the Tsinghua PBCSF Global Finance Forum in Beijing earlier that the intention of designing China's central bank digital currency was never to replace the US dollar's dominant position as the world's reserve currency as well as the preferred mode for payments.

Meanwhile, the PBOC is trying to strike a balance between privacy protection of the digital RMB users and necessary monitoring to trace, track or prevent illicit transactions, Zhou said.

The design of China's digital RMB can realize "controllable anonymous" payment at the current stage. It means, if transactions are not very frequent or the amount is not large, the monetary authorities do not need to intervene to verify or examine the transactions, said Li.

Therefore, even if the central bank knows about specific personal capital flows, its measures for privacy protection and data security, so far, are very reliable and trustworthy, he said.

The e-CNY pilot program started in April 2020, and has expanded to 10 cities plus a special applicational scenario－the 2022 Beijing Winter Olympics.

"It's the world's first central bank digital currency pilot launched in a major economy, so it has been highly concerned by the whole world," said Li.

More time may be needed to launch the digital RMB nationwide. The underlying architecture should be further optimized for broader application scenarios, and satisfy the huge consumer market, Li said. The technology should be improved to let users transfer digital currency at the same time.

The e-wallet will be developed with smart contracts, which has a powerful feature that allows users to implement payment autonomously under certain conditions and rules.

For example, the technology will help prevent the illegal withdrawal of funds deposited in prepaid accounts.

The digital RMB, or the e-wallet, is managed under a centralized system led by the central bank, which can verify the currency's authenticity. It is designed with multilevel permissions required for transferring funds, according to Mu.

Jiang Xueqing contributed to this story.