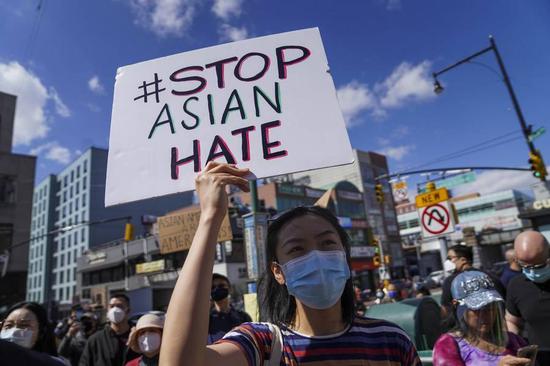 People attend a rally against racism and violence on Asian Americans in Flushing of New York, the United States, March 27, 2021. (Xinhua/Wang Ying)

Asian-owned businesses in the United States have suffered heavy losses amid the COVID-19 pandemic mainly due to difficulties in accessing government aid and fears over rising hate crimes against Asians, according to a recent report by Reuters.

By the end of March, sales for Asian-American businesses plummeted over 60 percent year on year, greater than the roughly 50-percent decline faced by other small businesses, Reuters quoted a research from the JPMorgan Chase Institute as saying.

Some 90 percent of small firms owned by Asian Americans lost revenue last year, greater than the 85 percent for Blacks, 81 percent for Hispanics and 77 percent for whites, said the study.

What's worse, many Asian-American business owners "are uncomfortable filling out complex financial forms necessary to tap into grants and government aid, such as the Paycheck Protection Program (PPP)," Jamie Lee was quoted as saying. Lee works for a community development organization that supports housing, development and small businesses in Seattle's Chinatown district.

The first round of PPP loans launched last spring largely excluded minority-owned businesses, according to a research published by the University of California at Santa Cruz and Frank Fossen of the University of Nevada.

More support for minority-owned businesses came after the program was adjusted to include more participation from smaller and community-based lenders, the researchers said.