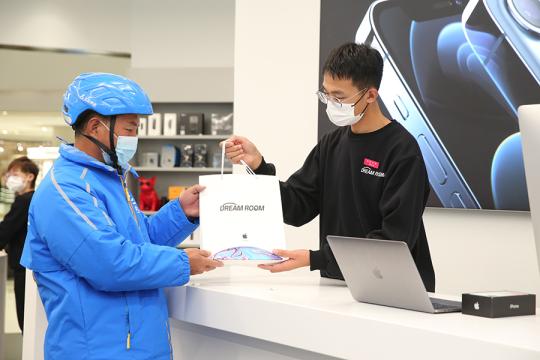 A Dada Now rider picks up the mobile phone order from a electronic store in Guangzhou at 2020 Singles Day shopping festival. (Photo provided to China Daily)

Chinese e-commerce giant JD on Monday announced a $800 million investment in its on-demand logistics platform Dada Group, through which it would hold a controlling 51 percent of the thriving instant delivery segment.

Dada would pick up on JD's instant retail and delivery business to tailor to the expanding consumption scenarios and categories, according to a press release by Dada, as e-commerce becomes a commonplace and increasingly fierce battlefield in China.

The investment came as JD is ramping up its logistics business by seeking an initial public offering in Hong Kong to enlarge warehouse networks and empower them with technologies.

JD also agreed not to sell, transfer or dispose of any shares bought in the deal for six months after the closing.

Dada operates JDDJ, one of China's largest local on-demand retail platforms that work with a bevy of retailers including Walmart and Yonghui supermarket and promise delivery as fast as within one hour.