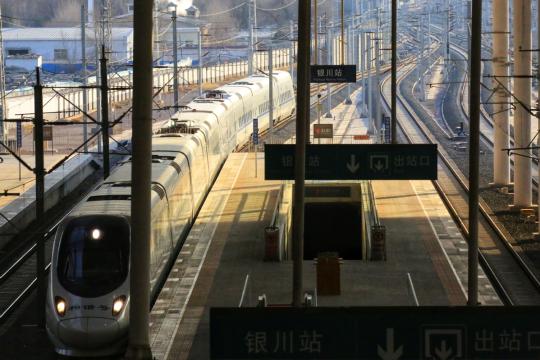 Handling more passengers and cargo and opening new railways are among goals set by China's national railway operator for this year that were unveiled on Monday.

A total of 3.11 billion railway trips are expected to be made across China this year, a year-on-year increase of 43.7 percent. Last year, the network handled 2.16 billion passenger trips.

Some 3.7 billion metric tons of cargo are expected to be handled by the railway network this year, a year-on-year rise of 3.4 percent.

This year, 3,700 kilometers of new railway tracks will be put into operation, compared with 4,933 km last year.

The company will improve services by setting up a floating price system, providing more online meal ordering options, and setting up quiet carriages on some bullet trains.

Lu said that as railway authorities develop "smart" services to benefit passengers, they should also be aware of the needs of those who do not have access to or are unable to use smartphone apps, such as the elderly and foreigners, and maintain offline services for them.

Epidemic prevention measures will continue to be carried out, including preventing overcrowding and providing separate seating spaces for passengers who feel unwell. Cold-chain services will be checked thoroughly to minimize virus transmission risks.

Overseas projects will include further improving freight services between China and Europe. Multimode transport networks will also be promoted, especially along a new trade corridor connecting areas in western China with the Guangxi Zhuang autonomous region and Southeast Asia. An international railway connecting Kunming, capital of Yunnan province, and Vientiane, the capital of Laos, will be put into operation by the end of this year.

Despite the global spread of COVID-19, a record 12,400 freight trains carrying a total of 1.14 million containers operated between China and Europe last year. The number of trains was up 50 percent year-on-year, while the freight volume was 56 percent higher.