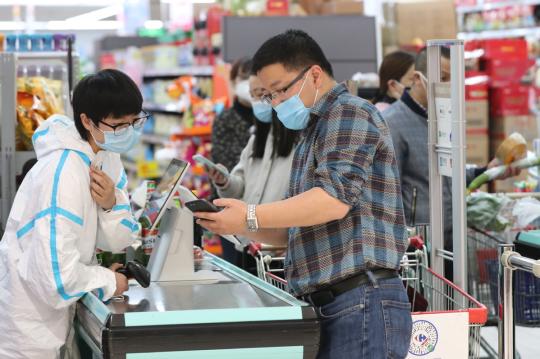 Residents check out with government-issued vouchers at a supermarket in Wuhan, Central China's Hubei province, on April 20, 2020. (Photo by Wang Jing/chinadaily.com.cn)

The main shopping areas in Wuhan, Hubei province, continued to enforce strict epidemic control measures over the weekend as the number of shoppers increased after the city government started to distribute discount coupons to stimulate consumption.

At noon on Sunday, the Wuhan government distributed 30 million yuan ($4.23 million) in consumption coupons that can be used in shops, supermarkets, restaurants and tourist and cultural sites citywide via major digital platforms, including Alipay and WeChat.

Eventually, the city government will distribute 500 million yuan in such coupons to revive the local economy hit hard by the novel coronavirus outbreak. About 18 million yuan of the vouchers have been designated for the registered low-income people in the city.

People were only allowed to choose one type of coupon to receive discounts ranging from 10 to 80 yuan depending on the amount that they spend. Coupons for supermarkets are the most popular. They were all gone within 45 seconds since they became available on Alipay, the company said.

Statistics from Alipay show that more than 40 cities across the country have issued coupons since March 13 to encourage people spend more. The move has already leveraged consumption worth over 10 billion yuan.