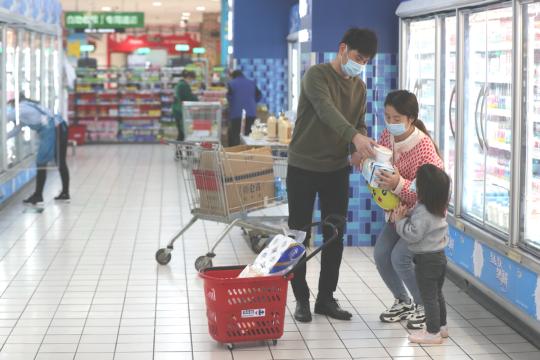 Residents buy food and supplies at a supermarket in Wuhan, Central China's Hubei province, on April 20, 2020. (Photo by Wang Jing/chinadaily.com.cn)

Distributing coupons can better stimulate consumption in China than directly giving people money, as has been done in some countries, like the United States, said Huang Manyu, professor of the economy and trade department of Zhongnan University of Economics and Law.

"Chinese people have the habit of saving, so they may save the money without spending it. Then it won't help to achieve the goal of stimulating consumption," Huang said.

People in Wuhan can redeem the first set of coupons from Monday to April 29. From April 30, the coupons will be distributed weekly. Visitors to the city are also eligible to collect the coupons.

"It's a sign that the city is recovering at a faster pace. Also, people are confident enough to come to the crowded shopping areas because of the strict epidemic control measures in public areas," said Liu Qiqi, a high school teacher who came to Han Street, a popular shopping area in central Wuhan, on Sunday.

The shopping area was among the first group of shopping malls and areas in Wuhan to open to shoppers on March 30 after strict epidemic control measures were put in place. All commercial areas in Wuhan were closed after the city, which was the hardest hit by the outbreak in China, was put under lockdown on Jan 23.