Production of pork may see rebound in 2021 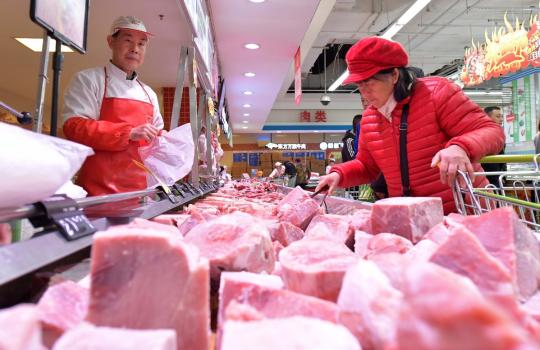 A local resident purchases pork at a supermarket in Nanchang, Jiangxi province, on Dec 22, 2019. (Photo/Xinhua)

Industry has been hindered by combo of African swine fever, virus outbreaks

Pork production in China will continue to drop due to the African swine fever and the coronavirus epidemic this year before a rebound next year, according to a report released on Monday.

With widening gaps between pork supply and demand, imports of pork are predicted to rise by about 33 percent this year to 2.8 million metric tons, said China Agricultural Outlook (2020-2029), released by the Chinese Academy of Agricultural Sciences.

It is expected that production of pork in China will start rising in 2021 and return to levels seen before the 2018 outbreaks of African swine fever in 2022, the report said.

Despite a decrease in the production of pork this year, the production of other meats, including poultry, is expected to continue to rise, which will result in a general balance in meat supply and demand, according to the report.

Xu Shiwei, a researcher in market information at the agricultural sciences academy, said that despite a number of measures taken to encourage the production of pork, some factors such as the limited number of breeding sows have hindered its recovery.

Zhu Zengyong, a researcher at the academy, said that although the stock of breeding sows, a major gauge for the potential of pork production, has been increasing in China since October last year, it usually takes 10 to 12 months before the increase will result in a bump in pork production, which explains the slow rebound of pork production in the first half of the year.

Although COVID-19 outbreaks in China in the first few months of this year have also affected pork supply and production, they also resulted in reduced demand for pork from consumers due to closures of restaurants, which to some extent has eased the gap between supply and demand, he said.

"With the increasing stock of hogs, it is predicted pork production will continue to recover in the latter half of this year, and the supply shortage will be further eased," he said.

African swine fever outbreaks, which were first reported in China in August 2018, have caused heavy losses to China's pork industry. Last year, total pork production in China stood at 42.5 million tons, a drop of more than 21 percent year-on-year, according to the National Bureau of Statistics.

Wei Hongyang, deputy director of the Ministry of Agriculture and Rural Affair's animal husbandry and veterinary department, said the intensity of African swine fever outbreaks and losses it has caused since the beginning of this year have declined compared with the same period of last year.

A total of 13 swine fever outbreaks have been reported across China since March, resulting in about 1,300 pigs being slaughtered－a sharp contrast from the 240,000 pigs that were slaughtered during the same period last year, he said.

However, more attention will be needed as risks of outbreaks increase with the restoration of pork production and increased transportation of pork across China, he said.