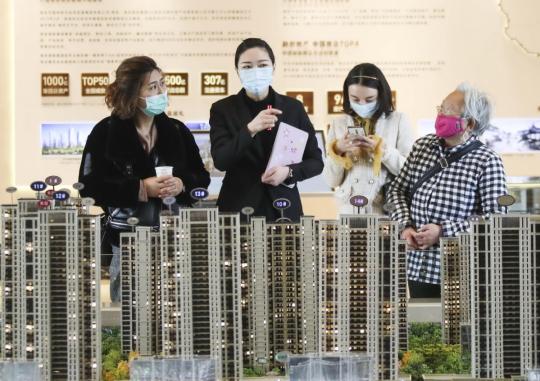 The gradual resumption of business and production has contributed to the recovery of the property market in March, and experts suggest the worst impact of the COVID-19 outbreak on the sector may have passed.

The novel coronavirus pandemic slammed the brakes on many sectors, including property. In the most severe stretch in February, 19 out of the 70 major Chinese cities tracked by the National Bureau of Statistics reported no new homes traded, while 24 cities had no deals in pre-owned residential apartments.

But as new confirmed cases of the contagion began declining, the real estate market showed signs of recovery in a growing number of cities.

"Urbanization is the key engine of China's property market, and nothing can overturn this trend. The worst month in history in terms of transactions is behind us, so the market can only get better," said Yan Yuejin, research director at E-House China R&D Institute. But Yan said that although the market has bottomed out, sales won't catch fire overnight.

The top 100 leading property developers in China saw sales revenue surge 136.2 percent month-on-month to 769 billion yuan ($108 billion) in March. Although this is 17 percent lower than the same period last year, the decline narrowed by about 21 percentage points in comparison to that of February, according to data collected by E-House (China) Enterprise Holdings Ltd.

Several newly built residential projects in Suzhou, Jiangsu province, were sold out immediately after being announced in late March, according to a report from Beijing Daily.

"The quick sales of some prime projects could greatly restore market confidence. The fundamentals of the real estate market are fine and solid demand is there, which was only pent-up in the past few months due to the contagion," said Lu Wenxi, a senior research manager at Centaline Shanghai.

The recovery of the secondary market is also well underway. In March, the transaction volume of pre-owned apartments in the 18 cities monitored by property broker Lianjia was 41.8 percent more than the combined amount of January and February, although it was merely 63 percent of that seen a year ago.

A report by Beike Real Estate Research Institute showed that the top five best-performing cities in the property sector are all located in southern and eastern regions of the country. Suzhou outperformed all other Chinese cities, followed by Nanjing, Jiangsu province; Hangzhou, Zhejiang province; Shenzhen, Guangdong province and Xiamen, Fujian province.

"It may take a longer period of time for the market to recover, especially in lower-tier cities where the urban governance is less sophisticated," said Chen Sheng, president of the China Real Estate Data Academy.

Chen added that Zhejiang and Guangdong provinces are on the front lines in terms of feeling the impact of the global pandemic as they rely heavily on exports.

The pandemic has also altered the investment and sales structure of property developers, posing great threats to their capital flow.

"The first half of this year should be good timing as developers may be eager to provide special offers as they struggle to survive," said Lu of Centaline Shanghai.

The whole industry is expected to experience a wave of phasing out of weaker and less competitive enterprises, Lu added.