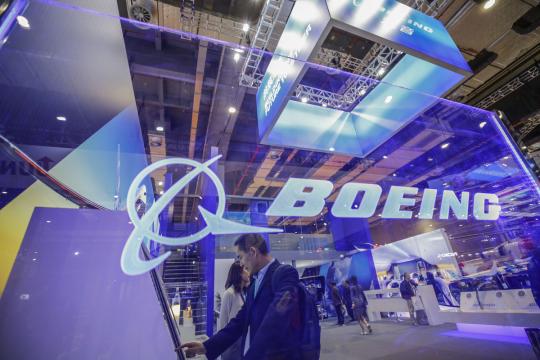 The booth of Boeing at the second China International Import Expo (CIIE) in Shanghai, on Nov 8, 2019. (Photo/Xinhua)

Boeing said it is correcting a manufacturing defect in some 737 MAX jets that could have knocked out both of the plane's engines in the event of a lightning strike.

In a notice published Wednesday in the Federal Register, the US Federal Aviation Administration (FAA) said some panels on the aircraft's engines, including a metallic layer that shields wiring, could be susceptible to "electromagnetic effects of lightning strikes" that "could potentially lead to dual engine power loss".

In building the plane, some mechanics polishing carbon composite engine pods mistakenly ground away some of the underlying metal foil that provides protection against lightning strikes, the FAA said.

Boeing said it immediately alerted airlines to the potential trouble when the problem was discovered.

The FAA said about 800 of the MAX jets must be inspected, and necessary repairs must be made before the planes will be cleared for flight.

Boeing estimated that 12 hours will be needed to fix any plane needing it. It said repairs won't delay the MAX's return to commercial service by the middle of the year if the FAA approves software updates to the plane's anti-stall device.

"We've not changed our estimate for return to service," Boeing said in a statement.

Boeing temporarily halted production of the 737 MAX in January after building about 400 planes that it couldn't deliver.

The 737 MAX, Boeing's top-selling plane, was grounded worldwide in March 2019 following two crashes that killed a total of 346 passengers and crew.