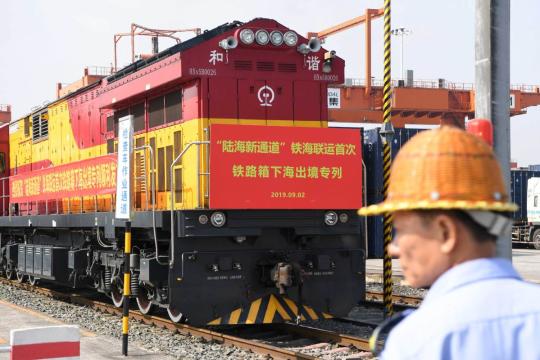 A train that uses the land-sea freight route departs from Chongqing in September. (TANG YI/XINHUA)

In early November, a batch of fresh "Musang King" durian fruit still in their hard skins arrived in Chongqing from Malaysia. They sold out immediately.

In the past, due to the extended transportation time, it was not easy for residents of inland China to obtain the perishable fruit.

However, thanks to a land-sea freight route launched in September 2017 that connects western China with members of the Association of Southeast Asian Nations, it now takes just 10 days to transport the fruit from Malaysia to China. The journey is 20 days shorter and about 40 percent cheaper than the traditional ocean route.

Eventually, the land-sea corridor will extend primarily from Chengdu, Sichuan province, and Chongqing to a group of Beibu Gulf ports in the Guangxi Zhuang autonomous region and Yangpu Port in Hainan province, connecting to Southeast Asia via the sea. It also will better link China's northwestern inland regions to major ports in the south.

The route comprises a network of railways, roads and air connections, with Chongqing and Chengdu serving as the key logistics hubs.

At present, the trade corridor connects 20 railway stations in 10 cities in China, and reaches 84 countries and 200 ports on six continents.

By Dec. 6, the ports on Beibu Gulf had seen 2,000 rail journeys since the launch of the rapid transit service that combines rail lines and sea routes.

Transportation has long been a hurdle to the economic development of China's landlocked western provinces, especially in terms of the export and import industries, which used to rely on the Yangtze River as a connection with Shanghai and the outside world.

In a bid to accelerate the opening-up and high-quality development of western China and deepen international economic and trade cooperation, Chongqing started exploring the new trade route several years ago.

The southwestern municipality on the upper reaches of the Yangtze boasts key geographical advantages as a strategic pivot of the development program for the western regions. It is also a connection point for the Belt and Road Initiative and the Yangtze Economic Belt.

The corridor was jointly built by western Chinese provinces and ASEAN members under the framework of the China-Singapore (Chongqing) Demonstration Initiative on Strategic Connectivity, signed in 2016.

After two years of experiments, the route was developed into a national strategy in August. The development plan, unveiled by the National Development and Reform Commission, aims to build an economical, efficient, convenient, green and safe land-sea corridor for the western regions.

"Now, as China is entering a new era and the development in the western region is facing a new situation, we need new opening-up policies and strategies," said Fan Yijiang, a senior official with the NDRC's Transportation Research Department.

The land-sea corridor will be completed by 2035, providing better transportation capacity and world-class customs clearance and logistics services, according to the NDRC.