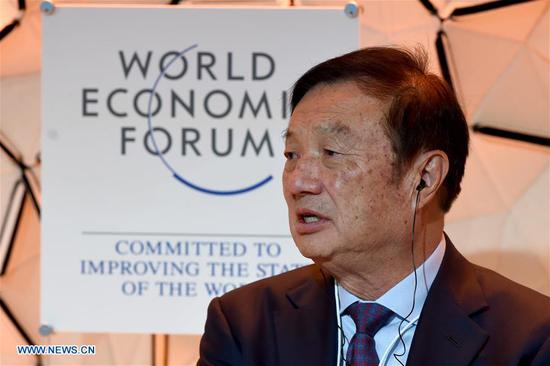 Huawei founder and CEO Ren Zhengfei speaks at a panel discussion during the annual meeting of the World Economic Forum in Davos, Switzerland, Jan. 21, 2020. (Xinhua/Guo Chen)

Founder of China's telecom equipment giant Huawei, Ren Zhengfei, told Davos that he suspects the U.S. would take more actions against the company while Huawei continues to survive.

"We got the experience now," he said during a session at the Winter Davos. "We have poured hundreds of billions of money into our Plan B, and that's why we can withstand the first wave of U.S. attack."

Huawei and the U.S.

The blacklisting stopped some U.S. companies from supplying software and hardware to the Chinese company. One of the most damaging suppliers is Google, whose apps like YouTube stopped appearing on Huawei smartphones.

Lack of Google apps resulted in a decline in smartphone sales of Huawei, especially in Europe. But the U.S. ban also acted as a big advertisement of Huawei in China, in which Huawei is the current dominator of the smartphone market and is showing no sign of retraction.

On the other hand, some of Huawei's U.S. suppliers are suffering a lot.

In response to the U.S. attacks, Huawei disclosed some "Plan B" products that can be used to replace U.S. parts, including Huawei Mobile Services (HMS), a replacement of its Google counterpart.

Ren also stressed that Huawei is a "pro-U.S." company that hired tens of U.S. consulting firms to teach Huawei how to manage a big company.

"The U.S. should be proud that their experience on management brought development to other places," he said.

"Fear of AI will fade away"

On the widespread fear of AI, Ren compared it with nuclear technology to tell the audience that AI can do good.

"I was born around the time of Hiroshima, and I saw people around me being afraid of nuclear bombs," he said. "But eventually nuclear power plants and the use of radiation in hospitals have benefited so many people."

"The same can be true for AI," Ren stressed.

Ren also compared the fear of AI to our ancestors' fear of trains and airplanes.

"As the world getting more and more industrialized, our fear of giant machines faded away," he said.

Ren added that he believes humans will also get used to AI in the near future.

"The tech world will not split into two"

"In my opinion, the Chinese government has not even started to think about the consequences of AI development," he told Davos. "China's education is still trying to train engineers instead of scientists, which means China does not have enough basic science research power to compete with the U.S.," he explained.

Ren said the U.S. is overthinking about China's sci-tech power.

Another argument Ren raised is about the essence of scientific research.

"There is only one truth. That's why the tech world will not split," he said. "Whoever gets the truth will share it with everyone else."