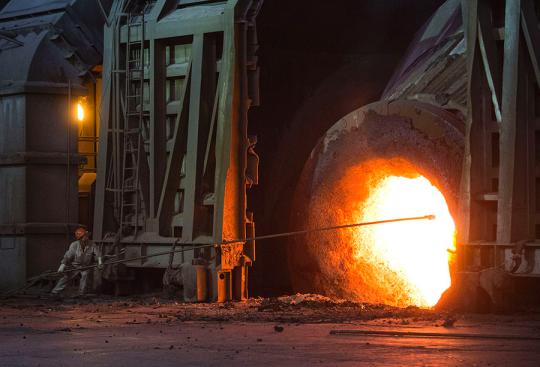 An employee moves molten iron at a furnace in a production area of Baowu Steel Group in Wuhan, capital of Hubei Province. (Photo provided to China Daily)

China Baowu Steel Group, the nation's largest steelmaker, is approaching its target of becoming a global industry leader with an annual output of 100 million metric tons as it intends to acquire a controlling stake in Chongqing Iron and Steel Co Ltd.

Shanghai-listed Chongqing Iron and Steel announced on Friday in a statement that its actual controller, Four Rivers Investment Management Co Ltd, had signed a letter of intent with China Baowu on transferring the controlling stake in the steelmaker.

According to the statement, China Baowu would take the controlling stake in Chongqing Iron and Steel through a share purchase. The deal is expected to be completed by the end of next June.

"Taking a controlling stake in Chongqing Iron and Steel is one of the latest acquisitions and consolidations China Baowu has made in the past few years since it unveiled the target of expanding its capacity to 100 million tons by 2021," said Wang Guoqing, director of the Lange Steel Information Center.

In its development scheme published in November 2017, China Baowu set a goal of expanding its output from 80 million tons to 100 million tons between 2019 and 2021.

China Baowu, a monolith formed by the merger of Shanghai-based Baosteel Group and Wuhan Iron and Steel Group in Central China's Hubei province in December 2016, is the nation's most competitive steelmaker with a production capacity of 70 million tons, second only worldwide to the Luxembourg-based ArcelorMittal.

The steel mill keeps expanding its scale. In June this year, it announced it would acquire Maanshan Iron and Steel Co Ltd (Magang), whose output of crude steel totaled 19.64 million tons in 2018.

"Magang has 20 million tons of steel capacity, and its unique product portfolio will extensively consolidate Baowu's strengths and increase its output to more than 90 million tons," said Chen Derong, chairman of China Baowu.

Chongqing Iron and Steel, established in 1997, went through a mixed ownership restructure at the end of 2017, according to ThePaper.cn report. Four Rivers is a fund launched in 2017 committed to forwarding the steel industry's restructuring and upgrade.

"Based in southwestern China, Chongqing Iron and Steel will also complete China Baowu's nationwide presence, as the steel giant already has a presence in the East, South, Northwest and most recently the North by Shougang Group transferring 15 percent of its listed arm stake to Baowu in November," said Wang.

"We are going to see more mergers and acquisitions in the future as an industry-wide restructuring and upgrade continues to roll out," she added.

By 2025, the country's top 10 steel enterprises will have their combined output contribute between 60 percent and 70 percent of the nation's total, among which, the top three or four companies' annual capacity will reach 80 million tons each, according to the target set by the State Council.