Number of centenarians in Shanghai increasing 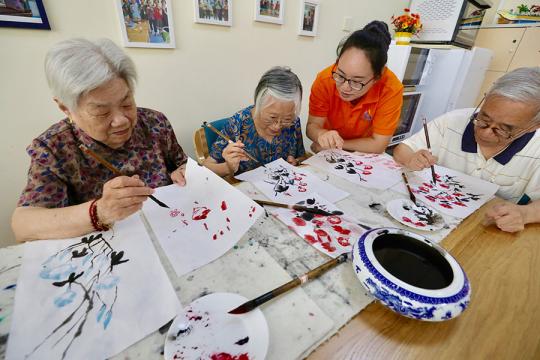 The number of centenarians in Shanghai reached 2,657 by the end of September-a record high in the city with the nation's oldest population-and the uptrend may continue, the municipal civil affairs bureau said.

Roughly 83 percent of Shanghai centenarians were between 100 and 102 years old, and 2.5 percent were aged 106 and above, with a 112-year-old woman being the oldest, the bureau said on Monday during the Double Ninth Festival, a traditional Chinese festival for showing respect to elders.

The bureau's figure also revealed that by the end of last year there were 25,600 permanent residents aged 95 or older, an increase of 2,700 from the previous year.

Official census figures showed that there was only one centenarian in Shanghai back in 1953. In 2004, the number of centenarians exceeded 500 and grew beyond 1,000 in 2011. That number surpassed 2,500 for the first time by the end of last year.

The increasing figures reflect continuously elevating living standards and medical and health services as the city strives to build itself into a world-class healthy city by 2030.

"We hope to reach the point where at least 40 percent of all cancer diagnoses are detected early," she said.

Shanghai Health Commission said that the average life expectancy of permanent residents in the city reached 83.6 years in 2018, compared with the national average of 77. The figure in Shanghai almost equaled Japan's 83.7, the world's highest.

A string of measures have been introduced in Shanghai to provide better elderly care. For example, more than 100 respite care centers, which strive to support the growing number of families caring for elderly while family size is shrinking, have been opened since 2015.

Residents can use the facilities for as little as a few hours or for up to three months, with prices ranging from 35 yuan ($5) for basic day care items, such as assisted showers, to 160 yuan a night for a bed and three meals a day.

Zhang Haixiang-deputy director of civil affairs in Jing'an, the city district with the highest percentage of senior residents-said such establishments have proved popular among the elderly and their children as seniors can enjoy professional services without leaving their community. The preference among seniors to spend their twilight years in their own homes has not been compromised.

Latest official data showed the municipality had about 5 million permanent residents aged 60 or older, accounting for 34 percent of the city's population, compared with 17.9 percent nationally. Beijing, the city with the second oldest population domestically, had 3.33 million residents aged 60 and above.