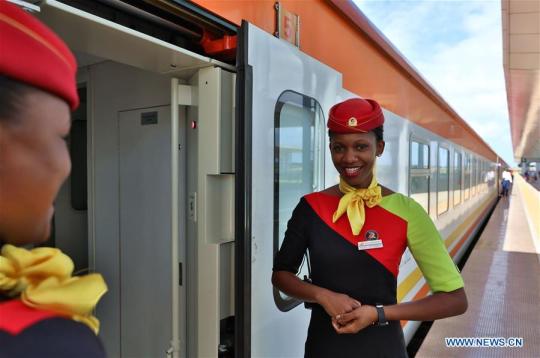 Attendants wait for passengers at the Mombasa Railway Station in Mombasa, Kenya, on June 2, 2018. The Chinese-built Mombasa-Nairobi SGR of some 480 kilometers has attained an occupancy rate of over 95 percent while reducing the time between Kenya's two biggest cities by half to five hours. (Photo/Xinhua)

Growth potential in the China-Africa corridor, which means helping Chinese companies to expand their business in Africa, is immense and will become a major revenue earner for lenders, according to banking executives familiar with the matter.

Absa Group Ltd, one of the largest financial services group in Africa with a presence in 12 countries, saw its 2018 revenue from the China-Africa corridor grow 40 percent year-on-year.

"Our history has largely been rooted in the UK-Africa, Europe-Africa corridors, which refer to UK or European corporate clients investing or doing business in Africa. That is where a significant portion of our revenue comes from. We do believe, however, that the China-Africa corridor that we have mapped out in our future budgets can amount to be of the same size as our historical corridors," said Cheryl Buss, managing principal of corporate banking at Absa Group.

Given the sheer appetite of Chinese corporates planning to move into Africa, she said she believes that the revenue growth prospects of Absa are probably bigger coming from the China-Africa corridor than from the UK-Africa, Europe-Africa corridors.

The growth potential of the China-Africa corridor is really huge because Africa has a lot of needs for the next few years due to the growth of the population, said Yann de Nanteuil, deputy head of Africa for Societe Generale, a leading European bank with operations in 19 African countries.

"Africa is not able to answer to everything by itself and will have to get some investments from foreign countries. Because of the huge needs in various sectors including transportation, logistics, agriculture and water, Chinese companies will develop their business in Africa and will probably need more and more financial products and services locally," he said.

China has been the largest trading partner of Africa for a decade now. The bilateral trade volume increased by 20 percent year-on-year to $204.2 billion in 2018, said Qian Keming, vice-minister of commerce, at a news conference in Beijing in June.

"The big differentiation we see in terms of the importance of China is that it offers much stronger support beyond just commercial benefits in Africa. It has been a key player in the infrastructure needs of many countries in Africa. That's been appreciated by various African countries," said Anand Naidoo, managing executive of client coverage at Absa.

Identifying power, infrastructure, mining, oil and gas, telecommunications, media, technology and agriculture as the key growth sectors in Africa, Naidoo said China is playing a key part in all these sectors.

"Traditionally, we have seen China play a big role in certain infrastructure fields. Over the past few years, we have seen a huge number of Chinese companies playing a massive role in the technology and telecommunication sectors. We have been eagerly looking at banking for these entities," he said.

Pierre-Yves Bonnet, group country head and chairman of Societe Generale (China) Ltd, also shared his observations on the changing trend of Chinese companies doing business in Africa over the past two decades.

According to Bonnet, the first wave of Chinese companies entering Africa are usually in the oil and gas sector or the infrastructure sector - mainly ports. The second phase is more dedicated to inland infrastructure, with large Chinese construction companies coming in and building roads, bridges and airports.

"The third wave of investment would come more in the manufacturing sector or new sectors like technology and telecom, and people would see more privately owned enterprises coming into Africa," he said.

After putting in place these organizations, Societe Generale saw a huge increase of the number of Chinese clients working with its network in Africa from less than 50 three years ago to 400 today, and the trend is still growing, said De Nanteuil.

The European bank, along with Absa, announced in January a commercial agreement on a combined wholesale banking offer to better serve their clients across the African continent. This agreement includes a combined offering dedicated to Chinese companies operating in Africa, which would allow them to benefit from an expanded geographical reach with complementary banking products and services.