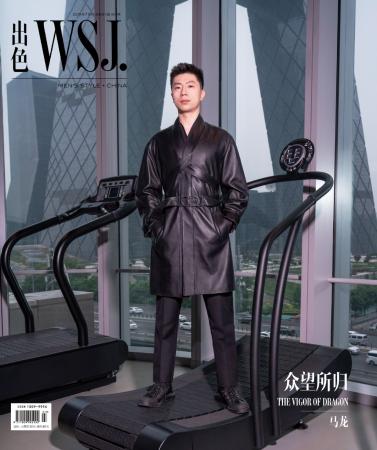 （The cover of the first Chinese issue of Wall Street Journal）

The first Chinese issue of Wall Street Journal's monthly lifestyle magazine was launched this week in partnership with a domestic company, Huasheng Media, the US news organization announced in Shanghai on July 23.

Unlike its global editionwhich takes the form of an insert within the newspaper, the WSJ Magazine China will be a standalone publication distributed by Huasheng, a Beijing-based company that has also teamed up with The New York Times, Kinfolk and Wallpaper for their lifestyle and travel publications in China.

Translated content from global editions and locally produced ones by Huasheng will each account for half of the China edition, according to Kristina O'Neil, editor-in-chief of the global and China editions.

"We feel that there is currently a particular demand from men in China for high quality and objective coverage of issues around fashion and with refined aesthetics," said Robert Thomson, CEO of News Corporation, the parent company of the publication, about the timing of the launch.

The WSJ Magazine, which has a special focus on fashion and luxury, has won several awards, including the "Hottest Lifestyle Magazine" by Adweek in the United States, since its launch in 2008.

The first issue of the China edition has 128 pages and features Chinese table tennis player Ma Long as one of its cover stars. Inside, locally created content includesan interview with the helmsman of luxury conglomerate LVMH in China.

China saw its heyday of publications centered around men and their lifestyle between 2006 and 2013, when annual growth rate of the distribution stayed as high as 30 percent. It was also in line with the surge of China's luxury market. With the rise of social media and individual influencers in recent years, however, a growing number of newspapers and magazines have shuttered, while others have shifted to become exclusivelydigital entities.

An exception would be GQ, the brand under Conde Nast that entered China in 2009. While it continues to produce original print content that continues todraw high readership and heated discussions, its WeChat account, known as GQ Lab, is currently the most followed public account on the platform with 1.3 million followers. A sponsored story on the account could cost as much as 1.3 million yuan ($188,890)

"A magazine is a different type of canvas. If you think about how people read digitally, it's so distracting, up and down, left and right. With a magazine, the experience is very focused. There is nothing quite so beautiful and tangibly tactile as a wonderfully edited magazine," said Thomson.