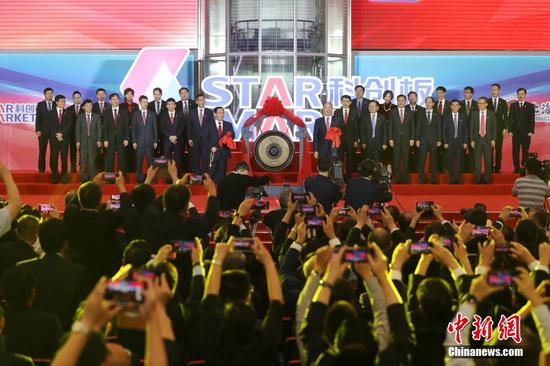 A listing ceremony for the first batch of companies on the STAR Market is held in the Shanghai Stock Exchange (SSE) on Monday. (Photo/China News Service)

A listing ceremony for the first batch of companies on the STAR Market was held in the trading hall of the Shanghai Stock Exchange (SSE) on Monday morning.

In a speech at the ceremony, Ying highly praised the strategic decision of establishing the STAR Market and pilot registration mechanism. "We believe that an increasing number of sci-tech innovative companies will be cultivated thanks to the establishment of the STAR Market."

The opening speeches were followed by a signing ceremony featuring representatives from the first batch of companies. Ying and Yi, along with other guests, oversaw the signing of listing and registration agreements.

A representative of the sponsor organisations remarked upon how the STAR Market became a reality only 259 days after the plan was first announced, saying "the STAR Market is a significant milestone for the Chinese stock market. It has been enhanced by the continued supervision of sponsors. We will keep optimizing ourselves to better serve the companies."

Li and Yi joined heads and representatives of the 25 companies as a gong was struck to signify the successful listing of the first batch of firms.

Trading on the STAR Market then began, marking the debut of the first batch of companies on the board. All 25 stocks increased by large margins as investors reacted positively to the first day of trading on the new board.

SSE STAR 50 Index to be released

The SSE and China Securities Index Co. Ltd announced Friday that they will officially release the index, dubbed the SSE STAR 50 index, on the 11th trading day following the listing of 30 companies on the board.

According to the exchange, the index will follow internationally accepted index compilation methods, using market value and liquidity as the screening criteria to select 50 stocks with the highest comprehensive ranking.