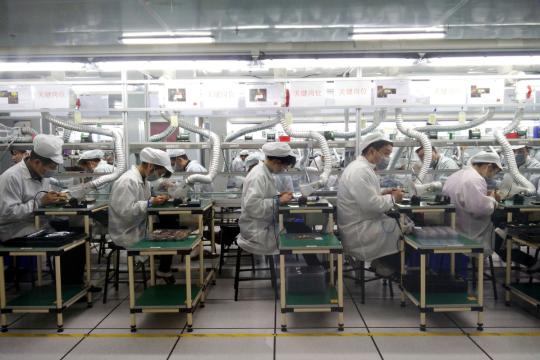 Employees of Foxconn Technology Group work at a production line of the company in Zhengzhou, capital of Henan Province. (Photo provided to China Daily)

The world's largest electronics contractor Foxconn denied it would close factories in the Chinese mainland to move in other countries on Wednesday.

Moreover, on its official WeChat account, the company also refuted other rumors including mass layoffs, abandoning cooperation with Huawei, and standing with the US during the China-US trade dispute.

Foxconn has been investing in the Chinese mainland for 31 years and the exports of its branch in Zhengzhou exceeded 200 billion yuan ($29 billion), ranking No 1 among China's top 200 exporters for five consecutive years, said the company.

The company will continue to deepen its presence in the Chinese mainland market in the future, Foxconn said.

The contractor also claimed it wouldn't cut off cooperation with some Chinese smartphone makers including Huawei and use different perspectives with customers.

Foxconn has invested in the US for 20 years. An investment plan in Wisconsin started from April 2017, and was officially announced in June of the same year as a strategic deployment to globalize its technology research and development. The project launched before the trade conflict emerged between China and US, so it does not mean Foxconn has stood with the US, the company said.

In addition, Foxconn reiterated it didn't lay off massive numbers of employees in the Chinese mainland factories, and said the rumor is old and not true.