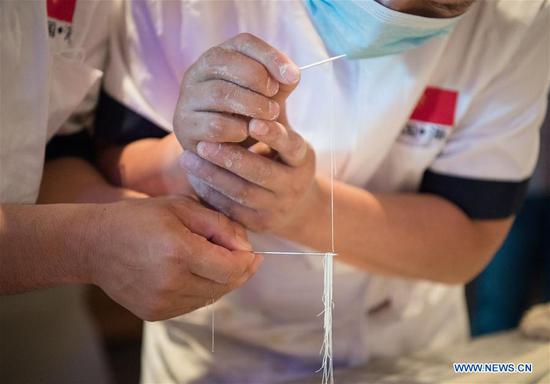 Dozens of Egyptians enjoyed the taste of Chinese hand-pulled noodles during a promotion on ramen from Northwest China's Qinghai Province on Friday in the Egyptian capital Cairo.

More than 300 guests and 18 ramen companies attended the event.

"I have tried Chinese noodles before, but this one is really different and delicious," Dina Mohsen, a college student of Chinese language, told Xinhua.

The young woman, who came to the event with friends, said she is a fan of the Chinese food and will follow the information about the new restaurants in Egypt serving Qinghai ramen.

"Three Qinghai ramen pavilions will be opened in Cairo and Alexandria. I hope Qinghai cuisine will bring good enjoyment and Chinese cultural experience to the Egyptian people," he told the guests.

This promotion not only strengthens economic and trade cooperation, and promotes the ramen industry, but also provides "a platform for exchange and cooperation in economy, culture and food," the Chinese official noted.

Through docking and negotiation between Qinghai ramen entrepreneurs and their counterparts in Egypt, Liu said, three ramen companies in Haidong will cooperate with Alexandria to open ramen shops in the Egyptian city.

"I hope that the Chinese cuisine will bring great benefits to the people of Egypt and bring rich Chinese experience to the food culture here," he added.

Haidong ramen shops are available in more than 270 large and medium-sized cities in China and more than 10 countries and regions in the world, Liu noted.

Shi Yuewen, Chinese cultural counselor to Egypt, said ramen is a famous Chinese food and a part of the Chinese traditional culture.

During the event, three agreements were signed between the Chinese and Egyptian companies.

Ma Zhen, chairman of Haidong Hehuangyuan Food and Beverage Investment Development Co., Ltd. and the head of the Cairo Peninsula Club signed a framework agreement for the international cooperation of Qinghai Ramen Shop.

After upgrading the relations between China and Egypt to a comprehensive strategic partnership in 2014, cultural exchange has been at its peak with frequent visits of artists, cultural and musical delegations between the two countries.