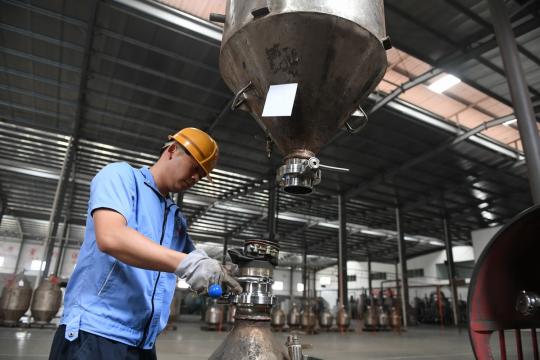 The National Development and Reform Commission recently held an expert symposium, which discussed the country's efforts to improve the industrial structure, protect resources and raise the scientific and technological levels of rare earth exploitation.

Experts attending the seminar said rare earth is an important strategic resource for modern industry as well as a key basic material for transforming traditional industries and developing emerging sectors.

More efforts are needed to strengthen the supervision over the rare earth industry, severely crack down on violations of laws or regulations, cut off the dark chain, tighten export controls, and establish a review mechanism that keeps track of whole processes of rare earth exports, experts noted.

Mei Xinyu, a researcher at the Chinese Academy of International Trade and Economic Cooperation, said China takes an absolute leading position in rare earth separation and purification technology with its high efficiency and low cost.

"To better utilize such a strategic resource, we need to continue keep on top of rare earth separation and purification," Mei added. "As a modern industrial country, China needs to maintain a competitive edge in manufacturing instead of relying on selling natural resources. Thus China also needs to gear up in developing intensive rare earth product processing."

Mei agreed that it is necessary to set up export controls for strategically important products that China produces in bulk, such as rare earths, saying it may be difficult to track the exports.

Rare earths are used in the production of items including high-tech consumer electronics and military equipment.

China currently produces around 80 percent of the world's supply of rare earths. However, the country's rare earth industry is faced with problems such as smuggling and illegal mining and environmental protection issues.

Jin Baisong, a retired researcher at the Chinese Academy of International Trade and Economic Cooperation, noted China's rare earth export quota didn't have the desired effect, as smuggling of rare earths was rampant and some export companies falsified the customs code to evade the export quota.

"The need therefore is to synchronize the extraction of rare earths with domestic demand, promulgate specific and detailed laws and regulations that are transparent and consistent and classify the export control measures," Jin said in a report published on the China Daily website.

The NDRC said in late May that China is willing to continue supplying rare earth metals to global markets but is opposed to those who use products made with rare earths to "suppress and dampen China's development."