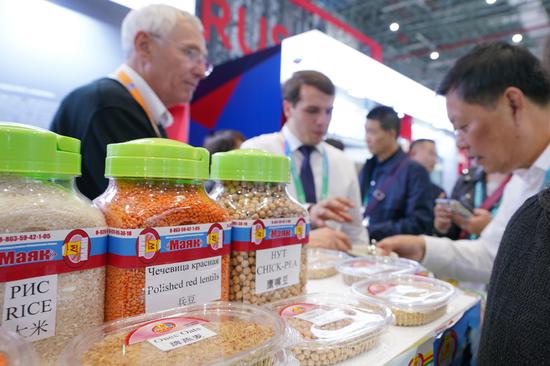 A visitor learns about cereal products at a booth of a Russian company during the first China International Import Expo (CIIE) in Shanghai, east China, Nov. 6, 2018. (Xinhua)

Every day long queues of trucks loaded with Russian wheat flour, rapeseed and other farm produce can be seen waiting to deliver goods to China on the Russian side of China's land checkpoint of Manzhouli.

The largest land border city between China and Russia handles 60 percent of the bilateral trade via land transport. The land checkpoint in Inner Mongolia Autonomous Region has seen a boom of agricultural trade driven by China's rising demand for high-quality agricultural products.

The land checkpoint's figures show that imports of agricultural products from Russia involving more than 30 varieties amounted to 340 million yuan (49 million U.S. dollars) in the first four months of this year, up 24 percent year on year.

"Russian farms are in a good position to produce high-quality agricultural products, which meet the demands of the Chinese market," said Grisha Grishinka, manager of Eva Company Ltd., a Russian trade firm.

The company is mainly engaged in agriculture, animal husbandry production and trade and works out of a 10,000-hectare farm in the Russian Far East.

Grishinka said orders from China have become the main source of the company's export business.

Gina Kozhevnikova, a businesswoman from Krasnokamensk in Russia, said she used to trade Russian specialties such as leather goods, carpets and tapestries to China. But she shifted her business to trade Russian bread, biscuits and food made of Russian flour to China from last year.

The agricultural trade between China and Russia hit a record high in 2018, exceeding 5 billion U.S. dollars, according to the Chinese Ministry of Commerce.