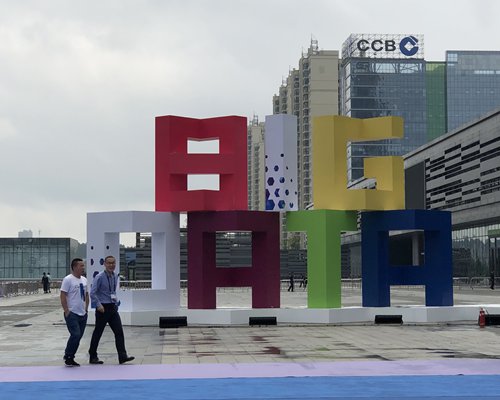 Visitors walk past the logo for big data in front of the exhibition hall where the China International Big Data Industry Expo 2019 is taking place in Guanshanhu district of Guiyang, Southwest China's Guizhou Province, on Sunday. (Photo: Huang Ge/GT)

The digital economy has grown into a powerful engine driving China's high-quality economic and social development, and Chinese tech firms have the confidence and ability to withstand uncertainties and pressure in the global market amid ongoing China-U.S. trade tensions, officials and corporate representatives said Sunday.

"The new generation of information technology, represented by the internet, big data and artificial intelligence, is booming at present and has significant and profound impacts on the economic development, social progress and people's lives of all countries," Chinese President Xi Jinping said in a congratulatory letter to the China International Big Data Industry Expo 2019.

The expo opened in Guiyang, capital of Southwest China's Guizhou Province on Sunday. It is the fifth year for Guiyang to host such an expo.

China attaches great importance to the development of the big data industry, and is willing to share opportunities of the digital economy's development with other countries and jointly explore new growth drivers and development paths by exploring new technologies, new business forms and new models, Xi said in the letter.

Xi also sent a congratulatory letter to the expo last year, showing his emphasis on advancing the big data industry and the recognition of the development of the sector, Sun Pishu, CEO of Inspur Group, told the Global Times on the sidelines of the expo.

The digital economy has fostered and strengthened the country's new drivers of development and data is the core for the development of the digital economy, Sun said, noting that more effort is needed to connect the production, circulation and application of data to help traditional industries realize digital transformation in the country.

China's digital economy was valued at 31.3 trillion yuan ($4.6 trillion) in 2018, accounting for 34.8 percent of the country's total GDP, said a report released by the Cyberspace Administration of China on May 8.

Compared to India in terms of digital economy, China is more advanced and has a more comprehensive eco system, Rahul Kanuganti, co-founder and CEO of India-based Flytta, told the Global Times on the sidelines of the expo.

The expo brings perspectives from different parts of the world to help create uniformity in policymaking systems in the world's big data industry and further facilitate global cooperation, Kanuganti said.

China's digital economy has great growth potential in the global context. The country's digital economy ranked second in the world in terms of competitive competence in 2018, followed by South Korea, Singapore and Japan, according to a report jointly released by the Tencent Research Institute and Renmin University of China on May 13. The U.S. ranked first, the report said.

The Chinese tech sector has been under pressure as the U.S. continues to escalate the trade war with China and has made the technology sector a battleground by blacklisting Chinese telecom company Huawei. U.S. officials are also reportedly considering blacklisting as many as five Chinese video surveillance companies.

Tech firm representatives told the Global Times on the sidelines of the expo that they were able to withstand the external pressure.

"We have confidence in our ability for research, development and innovation as well as the progress China has made in such sectors like AI and 5G," Liao Wang, CEO of Atoshi, a Beijing-based firm focusing on blockchain technology, told the Global Times on Sunday.

No country can exclude others to pursue technology growth, Liao noted.

"The big data industry has been a great impetus to Guiyang's growth during recent years. When I first came here 10 years ago, poor transportation and narrow streets impressed me most," Liao said.

"But now modern buildings have kept springing up in the city, and a global event in the high-tech sector is held each year that has attracted worldwide attention, which offers a window for the world to see the latest outcome of China's digital economic development," Liao noted.

Although Guizhou has been a less-developed region due to its geographic location, its remoteness and isolation also created advantages for the growth of the big data industry - located away from earthquake zones, the province boasts a cool climate and ample sources for power generation.

The number of people living in poverty declined by 7.68 million between 2013 and 2018 in Guizhou, Shen told the expo on Sunday.