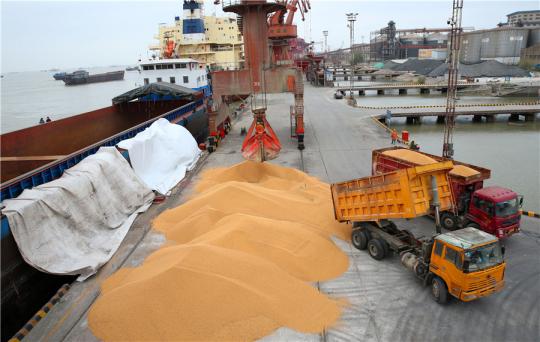 Soybeans imported from Brazil are transferred from trucks to a ship in Langshan Port in Nantong, Jiangsu province, in April. (Photo by Xu Congjun/For China Daily)

Other sources of imports have helped fill gap; alternatives could also contribute

The price of soybeans did not see big fluctuations last year, despite the drastic fall of imports from the United States following a tariff increase, the Ministry of Agriculture and Rural Affairs said on Wednesday.

Prices of imported soybeans in China increased by 6 percent between January and November last year, from 3.34 yuan to 3.54 yuan ($0.49 to $0.52) per kilogram, before falling to 3.42 yuan per kilo in December, Tang Ke, chief of market and information at the ministry, said at a news conference.

Government departments and enterprises took various steps last year to reduce the impact of reduced imports from the US. Moves included increasing imports from other countries, such as Brazil, and promoting the use of soybean substitutes in the feed industry to reduce demand, he said.

China relies heavily on imported soybeans, most of which are used to produce animal feed or vegetable oil. More than 80 percent of soybeans consumed in China are imported.

Tang predicted that China will have an adequate soybean supply from imports, citing increased planting this year in China and other countries, such as Argentina, and adequate stocks in the US, a major soybean producer.

"It is predicted that the output of soybeans in Argentina will increase by 17 million metric tons this year over last year," he said.

"Planting of soybeans is expected to continue to rise this year. We will closely follow soybean production and markets at home and abroad, and release information about its supply, demand and price in a timely manner."

China imported 88 million metric tons of soybeans last year, a decrease of 7.9 percent from 2017, according to the General Administration of Customs.

In 2017, imports of soybeans rose by nearly 15 percent year-on-year, with the US the second-largest source for China, behind Brazil, the administration said.

Imports of soybeans from the US fell sharply last year after China imposed an additional 25 percent tariff in July in response to US measures to increase tariffs on commodities imported from China.

Hu Bingchuan, a researcher at the Rural Development Institute of the Chinese Academy of Social Sciences, said that China's soybean imports from the US last year dropped by more than 10 million tons, or around 30 percent, because of trade frictions.

Meanwhile, imports from Brazil and Argentina increased greatly, he said.

Facing an imminent fall in soybean imports, the poultry and husbandry industry in China promoted the use of animal feed with lower protein content to fill the gap between supply and demand.

Qiao Shiyan, director of the National Research Center for Feed Engineering Technology, predicted that the use of feed with less protein, but adding amino acid supplements to the diet, could reduce the need for imported soybeans in the pork industry alone by about 10 million tons a year.

Outbreaks of African swine fever last year across China did not cause big fluctuations in the pork supply or price, the ministry's Tang said. Average wholesale prices of pork in China fell 12 percent last year from 2017 levels, he said.

Monitoring has shown a decline in the live pig stock in China, suggesting a high likelihood of a price rise in the latter half of this year, he said.

"We suggest pig farmers increase their stock of live pigs while ensuring the prevention and control of African swine fever," Tang said.