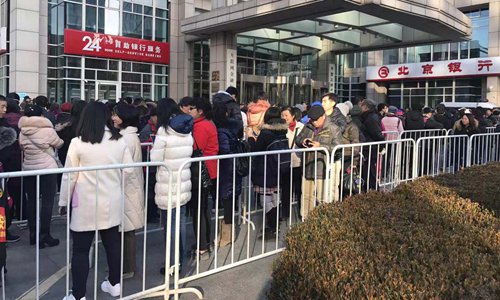 Hundreds of ofo users lined up outside the company's headquarters in Beijing demanding deposit refunds, but they left empty-handed and some found they were behind more than 6 million refund applications. (Photo: Li Xuanmin/GT)

Hundreds of customers of the ofo bike-sharing service who lined up outside the company's headquarters in Beijing's Haidian district on Tuesday to get their deposits back left empty-handed - and some found that they were behind more than 6 million refund applicants.

"I submitted my request for a refund more than two months ago, but I got nothing, and calls to ofo's service line aren't being unanswered," one of those customers, a 50-something Beijing resident surnamed Wu, told the Global Times on Tuesday.

A report by local news media, which claimed that one user successfully got a refund by coming in person to ofo's headquarters, went viral on the internet over the weekend. The report prompted many riders including Wu, who have lost patience and confidence, to line up at the headquarters to demand their money back.

Ofo said in November that the company had been "flooded with so many deposit refund requests" that users had to wait up to 15 working days to get their money back, according to a media report. The bike-sharing platform's deposit was at first set at 99 yuan ($14.36), but later it was raised to 199 yuan.

"I don't understand why it took just a click of a button when we made a deposit, but there's such a lengthy and troublesome process when we demanded it back," Wu said. She also complained about ofo's diminishing number of bikes around Beijing, "bad user experience" and broken bikes, all among the reasons she chose to abandon ofo's service.

Wu was relatively calm. But another Beijinger surnamed Wang who was next on line lost her cool after learning from an update of ofo's app that there were more than 6 million refund applications ahead of hers.

"I did not get my deposit back in bluegogo's case. I don't want to have the same problem at ofo," Wang told the Global Times. "I believe ofo still has some cash on hand, but they're lying. Our presence (here) will give them pressure." In December 2017, Bluegogo went bankrupt.

It was expected that ofo's total refunds could exceed 1 billion yuan ($145 million) as of 9 pm on Tuesday, with about 10 million refund applications, media reports said.

A security guard told the Global Times that consumers needed to line up in the chilly air for two hours to get into the office. But an ofo employee told the crowd outside the building that deposits, regardless of whether they're requested online or in person, would be reviewed and handled in the order they were submitted.

Several users said they were told the same thing after managing to get into the company's office. They told the Global Times that the ofo staff inside the office only gave them a paper showing the refund procedures and told them to wait.