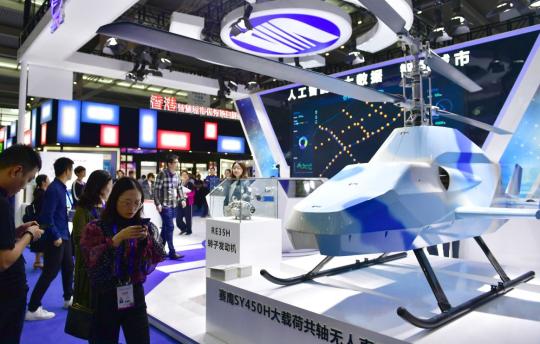 Visitors check out a drone at the China Hi-Tech Fair 2018 in Shenzhen, Guangdong Province, on Wednesday. (Photo by Xuan Hui/For China Daily)

China's further development of artificial intelligence, the internet of things and other advanced technologies will help other developing countries to achieve economic transformation and upgrade, according to participants of the China Hi-Tech Fair 2018.

Known as one of the country's largest and most influential technology festivals, the ongoing CHTF kicked off in Shenzhen, Guangdong province, on Wednesday.

With a total exhibition area of 140,000 square meters, this year's fair has attracted 3,356 exhibitors from 41 countries and regions, and international organizations from around the world, including 36 economies involved in the Belt and Road Initiative.

This year, Peru is taking part in the fair for the first time. Four enterprises from the South American country are displaying their technologies at the event, aiming to tap into the vast Chinese market and find Chinese business partners.

Yaudika Lema Rosales, a government official at the Ministry of Production in Peru, said the high-tech industry is an emerging sector in her country, while China has a lot of experience in areas such as AI and automation.

"For a very long time, Peru has relied on natural resources for its economic growth. It was only about 10 years ago that the government realized the importance of advanced tech and began to make efforts in technological development. Today, technology still accounts for a minor part of Peru's economy," she said.

"We hope to develop innovation and technology, and make it the new growth engine for our economy. China can help us in this process."

Rosales said there has been cooperation between the two countries on the government level, but she hopes the two sides can strengthen cooperation in research and development, and increase academic exchanges between universities.

Luis Vera Pacheco, founder and CEO of Adevcom, a technology company from Chile that offers internet of things solutions, said Chile is striving to develop smart cities, but its technological base is weak compared with China, especially in hardware.

"CHTF offers a great opportunity for us to gain access to advanced technologies. It will help the country to move faster toward its goal of building a technology-driven economy," he said.

Since its launch in 1999, the annual event has become a platform for showcasing the world's latest technological development, and promoting economic and trade cooperation between China and the rest of the world.