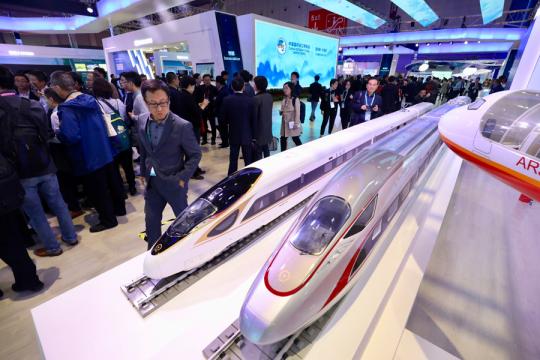 Models of the Fuxing fleet of bullet trains attract attention at China's pavilion during the China International Import Expo in Shanghai. （Photo by Zhu Xingxin/China Daily）

The design of China's pavilion at the China International Import Expo is intended to showcase the drive to further expand the nation's opening-up policy, a government official said on Tuesday.

Wu Zhengping, head of the Trade Development Bureau at the Ministry of Commerce, said the Chinese pavilion, the event's largest country pavilion, features many designs indicating that China will not close its doors to the world and will become increasingly open.

"We have not set up any walls or separate rooms in the pavilion. Our priority is to make the pavilion open and transparent," he said.

The pavilion, which covers 1,472 square meters, includes elements that display China's achievements since reform and opening-up was launched 40 years ago, he said.

The latest developments in the country's high-speed rail network, including the Fuxing fleet of trains, and its first self-developed passenger jet airliner, the C919, are highlighted at the pavilion.

The display offers firsthand experience of the driver's cabin of the Fuxing train and showcases a model of China's latest supercomputer.

"With these high-tech exhibits we are trying to demonstrate that innovation has been the driving force in China's economic and social development, and the results of that innovation have benefited people in China and the world," he said.

Also featured at the pavilion are details of the Hong Kong-Zhuhai-Macao Bridge, the world's longest sea crossing.

The display also features a freight service linking China and Europe, which has provided the Belt and Road Initiative with high-quality, efficient services.

The freight service connects 53 Chinese cities with 45 others in 15 European countries and regions, according to Chinese authorities.

Wu said the design of the pavilion also prioritized the interpretation of China's development concepts, including innovation-driven development, a green development drive and greater efforts to protect intellectual property rights.

China's achievements in poverty reduction are displayed at the pavilion, in addition to details of efforts to push forward the building of a community with a shared future for mankind.