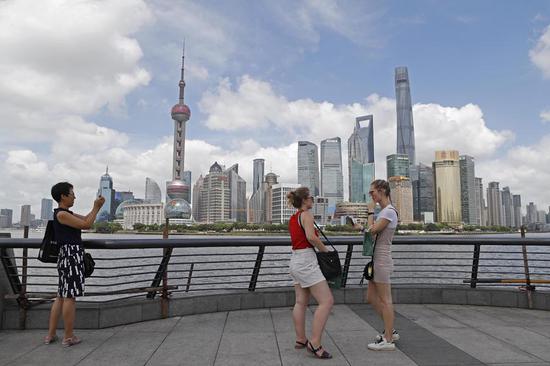 The municipal government of Shanghai announced 100 policies on Tuesday to address the central government's call for further opening-up, as the city seeks to speed up the pace of building an open, international economic system.

Shanghai's Party Secretary Li Qiang said at a promotional meeting on Tuesday that Shanghai is aiming to enhance its role as an international financial center and improve its modern service industry and advanced manufacturing. The city is also dedicated to protecting intellectual property rights by coordinating legal and administrative rules, he said.

The policies also reflect the city's ambition to build itself into an import hub serving the whole country, and its determination to create a convenient international business environment, he added.

To implement the policies, Li stressed that government departments should conduct in-depth surveys and seek the true demand of companies. He also called for clear task lists and timetables.

"Entering the new era, Shanghai should shoulder the new missions with which it has been entrusted by the central government," he said. "Further opening-up is the path we should take."

Shanghai should deepen the construction of the China (Shanghai) Pilot Free Trade Zone to lure more foreign investment and exert more influence over the innovations achieved in the zone.

The city should make the best of the China International Import Expo, scheduled for early November in the city, to build an import promotion network that covers the whole world. A more efficient trade environment is envisioned to improve Shanghai's international market influence.

For the financial sector, overseas investors will be encouraged to have greater participation in the local market, and foreign banks will be allowed to set up branches and subsidiaries in Shanghai.

Commercial banks will be able to set up financial asset investment and wealth management companies with no foreign capital limit. Meanwhile, foreign-controlled securities companies, investment funds and futures companies will be allowed to provide brokerage and consulting services.

As for the modern service and advanced manufacturing industries, Shanghai will follow the country's opening-up policies in automotive, aircraft and shipbuilding industries so that "made in Shanghai" will become a celebrated signature, Li said.

The city will also put more stress on protecting intellectual property rights, especially improving the ability of companies and institutions to protect their rights in overseas markets, he said.

Regarding China's Belt and Road Initiative, Li said Shanghai should attach equal importance to outbound Chinese companies and overseas ones interested in the Chinese market. Local companies are encouraged to make global investments.

In addition, it will be one of Shanghai's major missions to create an internationally competitive business environment that offers convenience in various procedures, as well as the most relaxed market entry and most complete legal system, Li added.