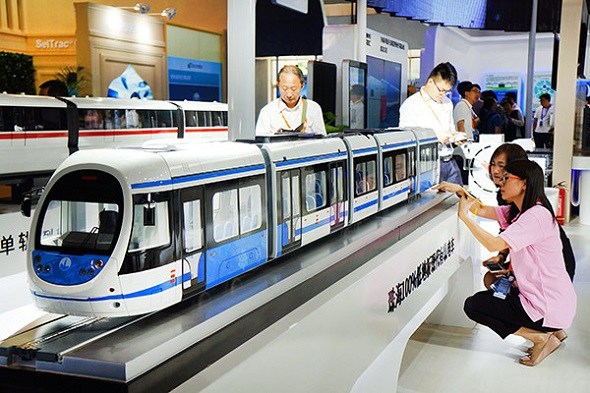 Visitors look at the latest models of urban rail trains shown at the International Urban Rail Exhibition in Beijing.(Photo by Guo Junfeng/Xinhua)

More cities, including smaller ones, rush to expand their metro systems

A growing number of Chinese cities have released plans to develop urban rail transit systems, especially subways, which are known for their safety and speed, to ease traffic, boost employment and push the pace of urbanization.

By the first half of 2017, 31 cities in China had urban rail transit systems in operation with 133 lines and a total length of 4,400 kilometers, according to data from the Beijing-based National Federation of Metro Transportation. 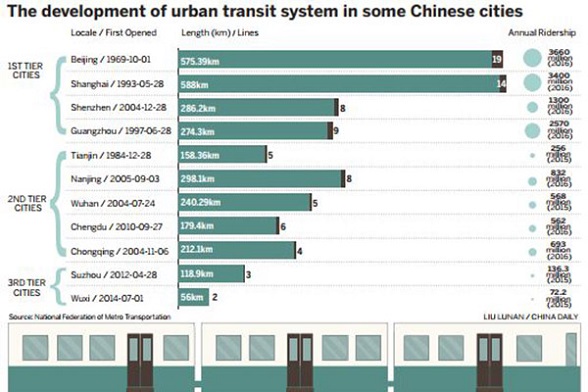 The country invested 384.7 billion yuan ($58.29 billion) in the urban rail transit sector in 2016, up 4.5 percent year-on-year, with major cities including Wuhan, Shanghai, Chengdu and Guangzhou investing more than 20 billion yuan.

"Though the investment in urban rail transit is now only half of that in the railway business, the figure will be close to and even exceed that of railways sooner or later," said Song Minhua, secretary-general of the China Association of Metros in Beijing, an organization under the supervision of the National Development and Reform Commission, or NDRC, the country's top economic regulator.

According to a report by the association, there are now 23 cities with more than 100 kilometers of unban rail transit lines under construction. Meanwhile, Chengdu, Wuhan, Qingdao and Beijing each have more than 300 km.

"Cities such as Chengdu, Wuhan and Zhengzhou have all put forward plans to expand their urban rail transit systems to 500 km. The scale is larger than what Beijing and Shanghai planned during the 2008 Olympic Games and the Shanghai World Expo in 2010," Song said.

To ensure sustainable development in the transport sector, the Ministry of Transport and the NDRC released a three-year plan for major transportation infrastructure construction projects (2016-18) in May 2016.

The plan included a combined investment of 4.7 trillion yuan, with 1.6 trillion yuan for urban rail transit projects, exceeding the 1.2 trillion yuan during the whole 12th Five-Year Plan (2011-15) period. Under the plan, the country will carry out 103 projects and build 2,000 km of new urban rail lines.

Urban rail systems have become the most important means of commuting in first-tier cities. In Beijing's urban area, about 86.6 percent of commuting traffic currently is via the mass transit railways. The number is even higher in Shanghai, reaching 89.1 percent.

The first subway line in China was Line 1 in Beijing, which opened in 1969. It runs west to east in parallel with the Chang'an Avenue in Beijing. It is still one of the world's busiest metro lines, with a daily ridership of 1.4 million.

In 2016, the 15 subway lines operated by Beijing Subway Ltd transported 3.03 billion people, up 6.81 percent year-on-year, according to information on the company's website.

By 2020, the total length of the Chinese capital's urban rail is expected to reach 1,000 km, according to Beijing Subway's developing plan.

In addition to major cities, the enthusiasm to build subways has spread to third and even fourth-tier cities.

Ning Jizhe, vice-minister of the NDRC, said China plans to relax minimum population requirements for cities that wish to build subway systems. Cities with an urban population of more than 1.5 million people will be allowed to build such projects.

Previously, Chinese cities had to meet many criteria to gain approval for a subway, including annual GDP of more than 100 billion yuan and an urban population of 3 million.

The regulations and approval processes for cities to apply for building urban rail transit projects were relaxed by the central government twice in 2013 and in 2015, respectively.

A total of 14 cities were approved to build new urban rail transit projects in 2016, among which 70 percent were third or even lower-tier cities.

In the first half of 2017, 53 cities were green-lighted to build urban rail transit networks, among them 22 third and even lower-tier cities.

Third-tier cities including Nantong, Wuhu, Luoyang and Shaoxing, and fourth-tier city Anyang, as well as county-level cities such as Wenshan and Fukang, all gained approval from the central government to build urban rail transit systems.

Luo Renjian, a researcher at the Institute of Transportation Research under the NDRC, said expanding urban rail transit networks is likely to benefit companies in the rail supply chain, including infrastructure construction companies, tunneling machine manufacturers and operation service providers, as well as retailers and estate developers.

The source of capital for urban rail development used to be from government allocation, but now there are more financing models, including public-private partnerships, build-operate-transfer arrangements and pledged supplementary lending, according to research from Pacific Securities.

However, risks still exist. The NDRC stopped a subway project in Baotou in North China's Inner Mongolia autonomous region in July, as the heavily indebted local government may not be able to shoulder huge maintenance costs and there may not be enough commuters.

To ensure healthy growth in this sector, Guangzhou set up a 10 billion yuan fund in October to finance the city's urban rail transport industry.

The fund was established by the Guangzhou Industrial Investment Fund Management Co and a number of local companies related to the urban rail transport industry, with an initial capital of 2 billion yuan.

It will be invested in rail transport projects, helping integrate related resources and technologies, according to Han Ying, chairman of the Guangzhou Industrial Investment Fund Management Co.

"The fund will help the city develop rail transportation into a pillar industry, which is estimated to reach more than 100 billion yuan in the future," Han said.