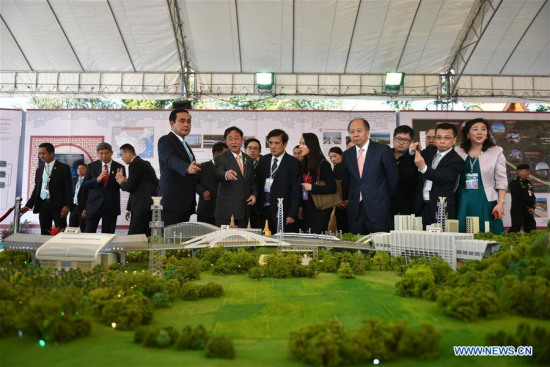 The China-Thailand high-speed railway will upgrade Thailand's transport system and unleash economic potentials of region along the route, said a Thai expert.

The construction of the first section of the railway line officially began on Thursday with a ground-breaking ceremony in the northeastern Thai province of Nakhon Ratchasima.

The 253-km first phase of the railway links Bangkok with Nakhon Ratchasima province. China is responsible for design of the railway, supervision of construction and manufacturing of trains and signal systems, among others.

Once completed, the railway with a maximum speed of 250 km per hour will be the first high-speed railway of Thailand.

The second phase of the project will link Nakhon Ratchasima with Nong Khai on the border with Laos, which connects with the China-Laos railway in an artery railway linking Thailand, Laos and China.

Huang, an expert who has been paying close attention to the project, looks forward to the operation of the railway. He envisions the boom of Thailand's economy in its northeastern part under the project.

Northeastern Thailand, a region with one-third of Thailand's land area that contains about one-third of the country's population, contributes only one 10th of the Kingdom's GDP, said Huang, adding that the poor transportation results in its sluggish development.

According to Huang, there are about 4,507 km of meter gauge lines in Thailand, of which 90 percent is still single track. There are also problems with old equipment, poor management and maintenance, and low speed.

As a result, the annual volume of railway freight is less than a 10th of the total transport volume. It is estimated that the cost of land transport is six times that of rail. Since rail does not offer an alternative, the logistics costs in Thailand are higher than those in other countries.

The China-Thailand high-speed railway project will help upgrade Thailand's railway system. It is foreseeable that the railway will bring wide-reaching connectivity in the country while reducing logistic costs, and thus make Thailand ASEAN's (Association of Southeast Asian Nations) trade and investment center, as well as a transport and logistics hub.

The China-Thailand railway will be finally connected with the China-Lao railway, thus using Chinese technology, which has been widely recognized across the world, will make it more accessible in the connectivity plan, said the expert.

The project is a genuine joint contribution of the two countries, which is also an achievement in bilateral cooperation under the Belt and Road Initiative, said Huang.

The project is part of China's Belt and Road infrastructure drive, which aims to build a modern-day "Silk Road" connecting China with economies in Southeast and Central Asia, Middle East and Europe by land and by sea.