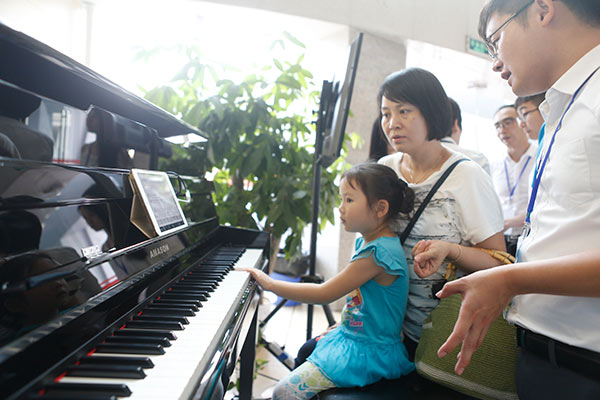 Guangzhou Pearl River Piano Group Co Ltd, the world's largest piano producer and seller, is banking on growing bilateral cultural exchanges and cooperation between China and the rest of the world to help further expand its market presence.

Yang Weihua, board secretary of Guangzhou Pearl River Piano Group Co Ltd, said Pearl River Piano is planning to participate in a series of international cultural, education and music events and competitions in 2018, in order to help expand exchanges and cooperation with its foreign counterparts and further raise its reputation at home and abroad.

"Such exchanges would certainly help Pearl River Piano increase its overseas sales in the future," he said.

Yang said he believed that Pearl River Piano would be able to tap opportunities in the Belt and Road Initiative-related countries and regions in tandem with China's growing bilateral engagements across the world.

"The Belt and Road Initiative encourages domestic companies to expand their overseas exchanges and such cooperation provides a golden opportunity for Pearl River Piano to go global. We have already produced high quality products that can compete in the global markets," said Yang.

"After the purchase of Germany's largest and most famous piano maker Schimmel last year, Pearl River Piano is now expecting to further expand its cooperation and exchanges with foreign counterparts through a series of culture, education, music events and competitions in 2018."

Pearl River Piano was set up in 1956 and now holds 90 percent of the shares in Schimmel, which has two piano production facilities in Germany and Poland.

"The purchase is a win-win deal for both Pearl River Piano and Schimmel. The German firm has expanded its sales in the mainland while Pearl River Piano is using Schimmel's marketing channels to increase global sales," according to Yang.

The company's pianos account for 27.27 percent of the global market and for 38.6 percent of the quantity sold in China. Its products are sold in more than 100 countries and regions around the world.