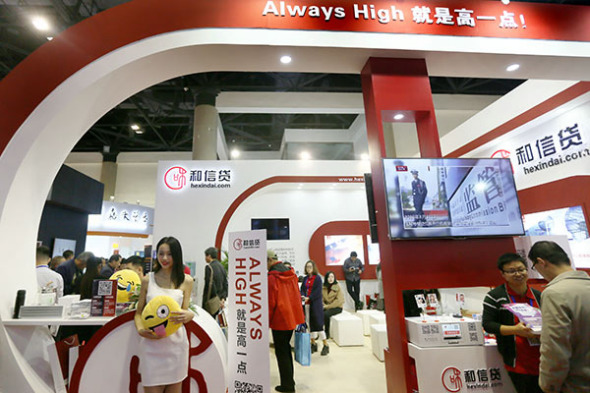 A booth of Hexindai Inc at an international financial investment and management exhibition in Beijing. The company is the first Chinese fintech company to list on the Nasdaq market. (Photo/China Daily)

Chinese online lenders are seeking growth opportunities and securing shares in the emerging peer-to-peer lending market by going public in the United States, according to industry experts.

Hexindai Inc became the first Chinese financial technology (fintech) company to list on the Nasdaq stock market last Friday. Priced at $10 per share, the IPO aims to raise $50 million. It was also the third Chinese fintech company that went public in the U.S. this year.

"After three to five years' practice, Chinese fintech companies are facing pressure from investors who want to cash out and the tightening regulations," he said, "Going public in overseas markets would be one way out of difficulty."

The fast growing demand for consumer lending in China has led to the mushrooming of P2P platforms. According to the global consulting firm Oliver Wyman, the market size for consumer lending will expand to $620 billion by 2020 with a compound annual growth rate of 49 percent.

With such a rapid growth in demand, P2P lending platforms such as Hexindai have seized the growth opportunities. Credit loans accounted for 99 percent of its total loans in the second quarter of 2017, with Q2 profit soaring to 60 million yuan, far ahead of its annual profit in 2016.

According to Zhang Qisen, chief finance officer of Hexindai, the company's target demographics are those who are aged 30 to 35 and have difficulty in getting loans from banks.

Last month, another Chinese fintech company Qudian Inc, backed by Ant Financial went public on the New York Stock Exchange. It raised $900 million through its initial public offering with shares priced at $24 each, making it the fourth largest IPO in the U.S. this year.

According to the U.S. Securities and Exchange Commission, Rong360 Inc, another online financial service provider, plans to raise $270 million through an initial public offering in New York.

Payday loan refers to a small, short-term unsecured loan with a high interest rate. With high interest rates, such loans have proved to be profitable for P2P lending platforms such as Qudian. But as a new business, such loans are loosely regulated, while Chinese regulators are working on the regulation and supervision.

"We have already set up an industrial park for internet financial safety," Huo Xuewen, Party chief of the Beijing Municipal Bureau of Financial Work, said during a fintech forum on Oct 28.