Wind of change is blowing through energy sector 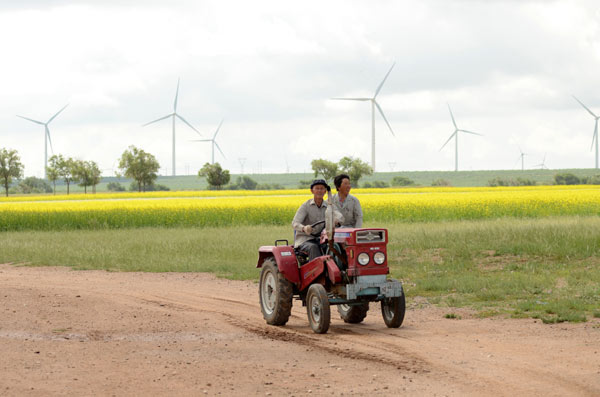 Two farmers on a tractor pass through a wind power farm in Inner Mongolia. (Photo by Su Weizhong/For China Daily)

Coal mining has become a way of life for Inner Mongolia but a new wave of green energy is about to change that.

Bu Xiaolin, chairman of North China's Inner Mongolia autonomous region, talked with pride about the new wind farms that are dotted around the region as he outlined a vision of a sustainable future.

"The region is speeding up the development and construction of new energy industries," he said last month. "This will boost the area's power structure, and increase economic and social development."

Energy generated by wind power in the northern Chinese region exceeded a record 10 million kilowatts in May, according to the Inner Mongolia Power (Group) Co Ltd.

The electricity company also reported that the 154 wind farms in the area generated 16,036 megawatts or 25 percent of total installed capacity.

"Inner Mongolia will continue to expand its renewable energy program during the 13th Five-Year Plan (2016-20)," stated the new energy department, which is run by the Inner Mongolia Development and Reform Commission.

The region now has the largest integrated wind power grid in China as it pushes ahead to consign fossil fuels to history.

"We have a great deal of experience in operating and managing wind power farms and grids," the new energy department stated.

Local government data showed that was 17 percent of the national total in the country last year.

During the same period, electricity production generated by wind farms was 46.6 billion kWh or 19.3 percent of the overall total in China.

"Wind farms and photovoltaic (solar) power can effectively promote the development of renewable industries," said Bi Guochen, deputy mayor of Hohhot, the capital of Inner Mongolia. "It is also an effective way to transform the economic development pattern."