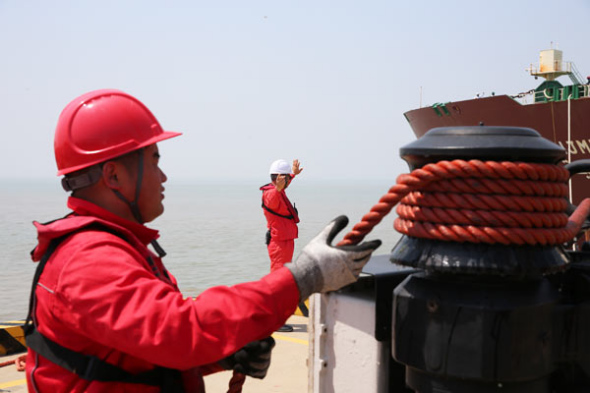 After delivering frigates to naval forces of Algeria and Pakistan, and mega-container ships, liquefied natural gas or LNG carriers and vehicle carriers to shipowners in the United States, Norway, Denmark, Germany and Singapore, Chinese shipyards have recently made inroads into the high-end ship segment, to compete with their South Korean competitors.

What's facilitating that trend is the "marine economy", whose meaning has widened in recent times to include industries like shipping, fishing, aquaculture, oil and gas.

Marine economy now includes sectors such as marine chemistry, biomedicine, ocean power, seawater use, marine tourism, ocean engineering and construction. A large variety of vessels serve these industries and sectors. Conventional vessels like bulk ships and ore carriers are no longer the kings of the marine economy transport system.

The new-age marine economy has created new opportunities for shipyards. More so for Chinese shipyards because of the Belt and Road Initiative.

Many economies participating in the initiative are seeking to develop trade, regional connectivity, offshore energy, tourism and other service businesses via the 21st Century Maritime Silk Road. Additional demand for ships is coming from China's increasing resource deployment into high-end manufacturing as part of the Made in China 2025 strategy.

These LNG carriers will be equipped with the latest dual-fuel system technology developed by the Chinese shipyard. The technology helps lower a ship's fuel consumption by up to 16 percent.

The vessel will be used in Russia's Yamal LNG project from 2019 or 2020 onward, through a wholly-owned subsidiary of MOL. The four contracted carriers will transport European LNG to and from the project.

Hudong-Zhonghua also delivered container-carriers, vehicle-carriers and chemical tankers to clients in Sweden and the Netherlands earlier this year.

Chen Jianliang, chairman of Hudong-Zhonghua, said China, as well as both developed and developing countries, are all eager to purchase natural gas from abroad to adopt greener energy. LNG carriers can meet the demand to secure their energy supply from overseas markets.

The American Bureau of Shipping, a Houston-based classification society, predicted that around 100 LNG carriers will be bought by different shipowners across the globe between 2017 and 2020.

"China is shifting from producing inefficient and dated vessels that are clogging up Chinese shipyards to investing heavily in the rapidly growing market of LNG and liquefied petroleum gas or LPG carriers, as well as marine fishing ships, law enforcement vessels, large icebreakers and chemical tankers," said Chen.