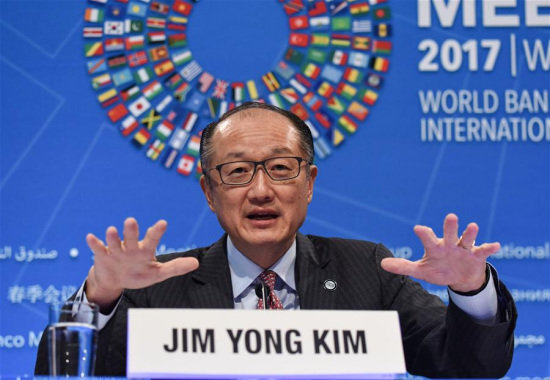 China is still embracing open trade, as the country has lifted millions of people out of poverty through engaging more and more in trade, said World Bank President Jim Yong Kim on Thursday.

Despite the rising protectionism sentiment, China continues to trade with all of its trading partners and work with Latin America, said Kim. He expected China's trade with these countries to go up further in the future.

He considered China's Belt and Road initiative as "unprecedented". "China has been stepping up and illustrating that it's concerned about development, not just in the neighboring countries or even along the Old Silk Road, but globally," he added.

According to Kim, the World Bank is cooperating well with Chinese government and China-initiated Asian Infrastructure Investment Bank (AIIB) on development.

"The One Belt One Road project is an extremely important one for the Chinese government and also for us," said Kim.

Asked about the U.S. administration's skepticism about climate change, Kim said the World Bank will continue to work with governments and private sectors in the world to boost financing for climate change, especially in China, India and Philippines.

"Trade is a major engine for growth, one of the pillars of prosperity," said Lagarde.

She downplayed any potential conflict with the new U.S. administration on trade issues, saying that "I have every reason to believe that we will make progress, we will cooperate all together in order to support, and indeed improve the system we have".

The IMF this week raised its forecast for global economic growth this year to 3.5 percent, partly because of China's stronger-than-expected growth.

Lagarde said there were good economic data coming from China and the Chinese economy is continuing rebalancing from investment towards consumption and services.

However, she added that China still needs to rein in credit growth in order to secure sustainable growth.