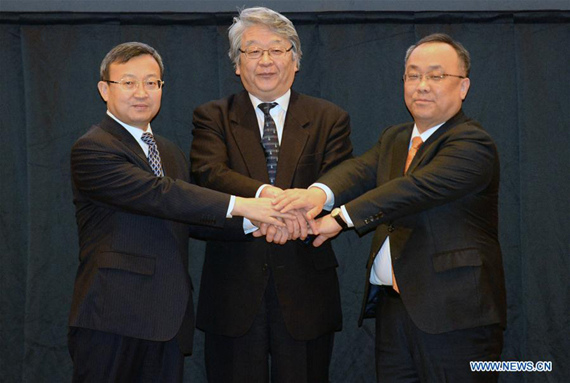 Top negotiators from China, Japan and the Republic of Korea (ROK) met here Thursday on pushing forward trade in goods and services as well as investment at the 12th round of talks on a trilateral free trade agreement (FTA).

Wang Shouwen, Chinese vice minister of commerce, said at the meeting that while global economy is facing a slowdown and uncertain future, and world trade and investment are encountering impediments, China's economic growth in the past decade underscores the fact that global trade has played and will continue to play a key role in driving the world economy.

Wang said that if China, Japan and ROK could make substantial headways in the FTA talks, it will send a positive signal to the world on anti-protectionism and safeguarding economic globalization.

The experiences gained from the talks on the trilateral FTA will also contribute to the negotiations on the Regional Comprehensive Economic Partnership (RCEP), the Chinese vice minister said.