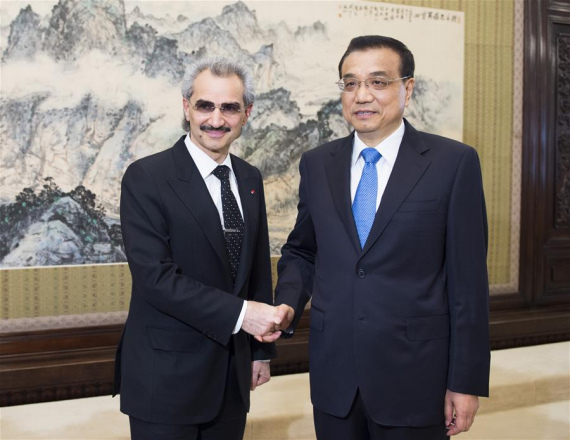 "As far as a company is registered in China, no matter it is funded by Chinese or foreigners, we will treat them as equals and provide a fair-play environment for them," Li told visiting Saudi Arabian Prince Alwaleed Bin Talal Bin Abdulaziz Alsaud, chairman of the Kingdom Holding Company, a leading investment holding company based in Riyadh.

Foreign firms are welcome to invest in China, and bring with them capital, technology and advanced management expertise, the premier said, adding China is committed to becoming an attractive investment destination.

Li stressed that China's large population and growing consumption power, its emphasis on emerging service industries and its upgrading of traditional industries will create new opportunities for businesses.

"We believe foreign investment in China will be able to enjoy a stable market expectation and due returns," he said.

Alwaleed said the strategic relations between Saudi Arabia and China are solid foundation for cooperation between companies of the two countries, and that Saudi Arabian companies are willing to strengthen cooperation with their Chinese counterparts.