China has a healthy appetite for food imports 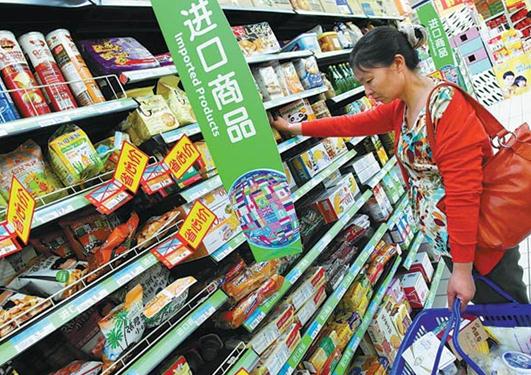 A customer selects imported biscuits, cookies and crackers at a supermarket in Yichang, Hubei province. As Chinese consumers now look for more choices in terms of health and convenience, food imports to China have grown rapidly in recent years.(Photo/Provided to China Daily)

China has long taken a cautious approach to controlling its staple grain import quota each year to ensure food security, but when it comes to other foodstuffs, overseas agricultural products are being warmly welcomed by the nation's fast growing middle class.

Thanks to the country's fatter wallets and increasingly diverse diet, China imported 320,000 metric tons of fresh milk and 283,000 tons of mutton in 2014, up 73.5 and 9.3 percent year-on-year, according to the General Administration of Customs.

The world's most populous nation also purchased 71.4 million tons of soybeans and 383 million liters of wine from overseas markets, up 12.7 and 1.6 percent, respectively, from a year earlier.

The value of its fruit imports reached $9.19 billion last year, rising 6.3 percent on a year-on-year basis.

Ding Lixin, a researcher at the Chinese Academy of Agricultural Sciences in Beijing, says even though the prices of mining resource-based commodities such as coal and iron ore are quite low at the moment in the global market, international wine producers, meat suppliers and dairy product providers have become the biggest beneficiaries of China's market boom for agricultural products.

"As a result, China has adequately raised the quantity of its grain imports, especially corn, soybeans, rapeseed meal and sorghum, over the past decade to support the growth of its livestock and aquatic feed industries."

Food consumption is normally a clear indicator of a nation's economic health and the size of its population. In China, meat consumption is rising, and people are eating a greater variety.

Staple foodstuffs such as meat, fish, eggs and milk have become more sophisticated, and consumers now look for more choices in terms of health and convenience.

As many people in China, in particular in urban areas, are increasingly aware that pork contains more fat and less protein than lamb, the country's pork consumption and import volume dropped 2 and 3.3 percent on a year-on-year basis in 2014.

Yu Bin, director of the department of macroeconomic research at the State Council Development Research Center, says although changes in food consumption reflect greater economic vitality, the country's ongoing urbanization and upwardly mobile population are other key factors that have shifted Chinese diets from being mostly grain-based to ones that include more meat and dairy products.

Chinese citizens consumed an average of 17.2 kilograms of mutton per capita in 2014, compared with 12 kilograms in 2008. The Beijing-based China Meat Association predicts that this figure will reach 28 kg between 2017 and 2022.

Yu says demand for lamb in China's western region, particularly in the Ningxia Hui and Xinjiang Uygur autonomous regions, and Qinghai and Gansu provinces, has quickly grown over the past five years, mainly because it is getting more expensive to raise sheep in western China, where the economy and livestock industry are less developed than in the eastern provinces.

Due to rising feed prices, limited grazing land and the breeding cycle, China's sheep breeding sector lags behind consumer demand, resulting in higher lamb prices over the past five years, according to a report released last December by the Chinese Academy of Agricultural Sciences.

"As China has found it impossible to grow all of the food it needs and has consequently formed closer ties with the world food market, demand for fruit, olive oil, wine, meat and dairy products will certainly provide many opportunities for major agricultural produce exporters such as Australia, the United States, Chile, Brazil and Argentina," Yu says.

Eager to meet domestic demand for various foodstuffs, the Chinese government has increased international trade in food products through trading arrangements such as signing free trade agreements or non-tariff deals for certain agricultural products with its trading partners in Europe, Africa and South America.

As China and Australia announced the practical conclusion of negotiations on an FTA last November, Zheng Fengtian, a professor at the school of agricultural economics and rural development at Renmin University of China in Beijing, says the prices of many Australian agricultural products will be fairly attractive to the Chinese buyers under the China-Australia FTA framework.

The agreement will cover more than 10 areas, including a simplified review procedure for investments, most-favored-nation status, favorable market access rules and market transparency.

China now imposes 12 to 25 percent tariffs on Australian beef, but these levies will be phased out within nine years under the pact.

Tariffs on Australian wine will also be dropped by 2018.

Australian beef accounted for 56 percent of China's beef imports in 2014. The agribusiness research department of the Australia and New Zealand Banking Group Ltd has forecast that the total value of Australian beef shipped to China will reach A$130 billion ($102 billion) by 2030.