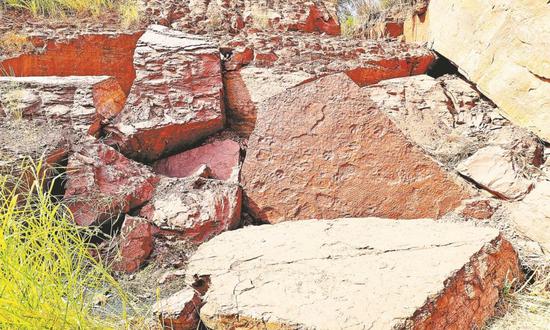 Large-area dinosaur footprints from the dinosaurs from Late Cretaceous, which were rarely preserved in both concave and convex slabs, have been discovered in East China's Fujian Province.

Experts said such footprints have significant value to the study of dinosaurs' living habits and environment in that period.

Citing Shanghang natural resources authority, media revealed recently that these tracks were found on the eastern side of the Late Cretaceous dinosaur footprints that were previously discovered in the Longxiang village in Shanghang county in Fujian.

The new footprints were revealed due to recent rock slide. Pictures on the spot showed that the dinosaur footprints were preserved in the imprint fossils (or mold) and the infilling fossil (or cast) and corresponded with each other just as if a set of opened mold.

According to open materials online, each dinosaur footprint will be represented by two fossils - an imprint, or mould, in the upper surface of the substrate, and its infilling, or cast.

Covering an area of nearly 15 square meters, the fossil specimen clearly preserved nearly 30 tracks from six kinds of dinosaurs from Late Cretaceous, which has significant scientific value in study of dinosaurs' living habits and living environment in the period because most previously discovered tracks belong to Jurassic or Cretaceus period, researchers told media.

Such a large area of dinosaur footprint preserved in both positive and negative slabs hadn't been discovered in China or the world before because most of the previously discovered dinosaur footprints were either preserved on the concave side or the convex side and it is very rare to see them on both imprint and infilling sides appear at the same time, Wang Xiaolin, a research fellow from the Institute of Vertebrate Paleontology and Paleoanthropology in the Chinese Academy of Sciences, who participated the exploration on the spot, told media.