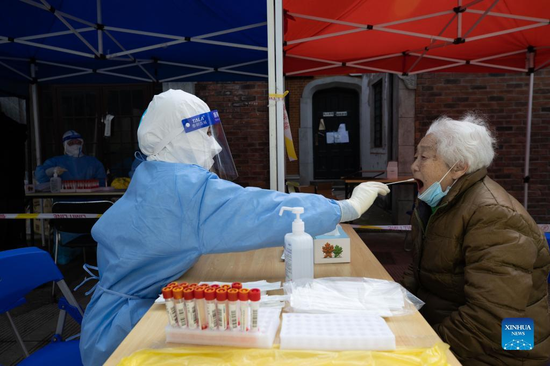 A medical worker takes a swab sample from a woman for nucleic acid test in Changning District of east China's Shanghai, April 1, 2022. Shanghai has launched a nucleic acid testing campaign in areas west of the Huangpu River from Friday amid the second phase of the city's closed-off management. (Xinhua/Jin Liwang)

Shanghai will conduct citywide antigen testing on Sunday and nucleic acid testing on Monday amid efforts to contain the recent resurgence of COVID-19 cases in the metropolis, according to local authorities.

The measures were aimed at completely eliminating potential risks, cutting off the chain of transmission, curbing the spread of the virus, and achieving dynamic zero-COVID as soon as possible, Wu Qianyu, an official with the Shanghai Municipal Health Commission, told a press conference on Sunday.

Zhang Hongying, a resident of the Jing'an District, received an urgent message on WeChat sent by her subdistrict office at around 2:00 p.m. Sunday, requiring residents in the community to undergo antigen testing.

"They asked us to place a paper bag or basket outside the door, and volunteers would distribute antigen home-testing kits door-to-door. We also need to post a note on the door showing all the names of the people in the house," Zhang said.

She said that antigen home-testing kits were sent to her home at 3:00 p.m. and the five family members did the tests just in a few minutes.

"The results are all negative. We have uploaded the photos to the subdistrict office," Zhang said.

Medical teams coming from the nearby provinces of Zhejiang, Jiangsu and Anhui have already arrived in Shanghai to help the fight against the epidemic, according to the Shanghai Municipal Health Commission.

At around 9:30 a.m. Sunday, the first batch of nine COVID-19 patients was discharged from the makeshift hospital of the Shanghai World Expo Exhibition and Convention Center, after they produced negative nucleic acid test results.

More than 200 patients aged from 11 to over 80 are expected to be discharged from the makeshift hospital on Sunday.

Opened on March 25, the makeshift hospital has received and treated more than 7,100 asymptomatic carriers and patients with mild symptoms. About 910 medical staff are working there to provide medical support.

Other makeshift facilities in Shanghai have also seen patients recovering and being discharged since Sunday.

Yang Jiapei, 27, a PhD student at Shanghai Jiao Tong University left a makeshift hospital on Sunday afternoon. However, she must undergo another seven days of quarantine at a designated hotel before returning to the campus.

"I just had a slight cough, and the symptoms were even milder than a normal cold," recalled Yang, who was classified into an asymptomatic carrier and began to receive treatment on March 15.

"I was overwhelmed when I learned that I was infected with the virus. But after experiencing the whole treatment process, I'd like to say that it isn't so terrible. All you need to do is remain cheerful and receive the treatment, and you'll soon be back on your feet," Yang said.