The World Health Organization (WHO) earlier this month called for a second study into the origins of COVID-19 in China, which has firmly rejected the request.

"The China-WHO joint research report clearly concluded that the 'lab leak theory is extremely unlikely,' and there is broad consensus in the international scientific community on this. The second phase of the work plan still focuses on 'China's violation of laboratory procedures that caused the release of the virus,' while deliberately ignoring earlier cases around the world," said Chinese Foreign Ministry spokesperson Zhao Lijian during a press conference on July 23. 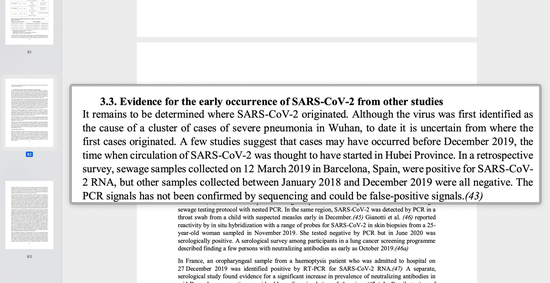 An excerpt from WHO-convened Global Study of Origins of SARS-CoV-2: China Part, page 82. /WHO

The earlier cases Zhao refers to are acknowledged in the China-WHO joint report of tracing the origins of the virus. Latest studies have shifted the timeline of the virus' emergence to as early as October 2019 in Italy – months before the first cases were detected in Wuhan at the end of the year. As requested by the WHO, blood samples were re-tested at laboratories in Italy and the Netherlands. Researchers said the earliest sample, collected in October 2019, showed the presence of one type of coronavirus antibody, IgM.

Researchers in the U.S., Brazil, France and Spain have also identified possible red flags. From December 13, 2019 to January 17, 2020, 106 samples of archived blood samples from nine states in the U.S. tested positive for novel coronavirus antibodies. In Brazil, the virus was detected in sewage samples collected on November 27, 2019. And in Spain, the same results showed up in wastewater samples from January 2020. In France, a throat swab from a patient with hemoptysis admitted to a hospital on December 27, 2019 tested positive for the novel coronavirus.

Based on all the facts, China says investigations should also be conducted in other countries if the WHO needs to dig deeper into the origins of COVID-19.

The U.S. wants a revisit to the lab leak theory months after the WHO released its findings from Wuhan.

"An incident in a laboratory is an extremely unlikely way to introduce the virus into the human population," Dr. Peter Ben Embark, head of the foreign side of the WHO team, said earlier during the WHO-China joint study press conference in Wuhan after the first phase of investigation.

Now, the WHO says it wants to go back to Wuhan and audit labs – a statement that continues to fuel a theory once dismissed as fringe conspiracy.

"If the Chinese were deliberately going to release a virus, I think they would be very foolish to do so right next to their institute of virology," said Natasha Loder, health policy editor of The Economist.

For the second round of tracing, the WHO is calling for the same things it thanked China for in its first report – cooperation and transparency. This has triggered China, and health officials have called it a disrespect for common sense and science.