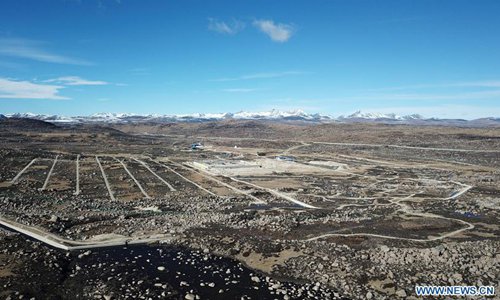 Aerial photo taken on Nov. 17, 2017 shows the construction site of the Large High Altitude Air Shower Observatory (LHAASO), in southwest China's Sichuan Province. The project of LHAASO is being built in mountains of the eastern part of Qinghai-Tibet Plateau at an average altitude of 4,110 meters, and will partially go into use next year. Spanning 1.36 square kilometers, the size of 10 standard soccer fields, the LHAASO will detect cosmic rays and analyze the sources of the rays. (Xinhua/Jin Liwang)

Chinese astronomers have detected record-breaking, most powerful gamma ray bursts (GRBs) in the world, boosting the highest-energy GRBs record by almost 20 times and marking the first detection of a GRB with energies above 10 TeV.

The observations have broken several records and are of great value in revealing the mechanism of the phenomenon, observers said on Sunday.

GRB 221009A was found to deliver the highest energy of any GRB ever detected, according to media reports. The energy of such events is usually measured in giga-electronvolts (GeV), with a few being recorded with energies of abpit 1 tera-electronvolt (TeV), New Atlas, a news website focusing on world’s science and technology advancement, reported on Friday.

However, this new event has reached a record-breaking 18 TeV, marking the first detection of a GRB with energies above 10 TeV, which is more than 10 times brighter than the brightest GRB ever observed by humans.

GRBs are immensely energetic explosions that have been observed in distant galaxies. They are the most energetic and luminous electromagnetic events since the Big Bang. Bursts can last from ten milliseconds to several hours. The energy released by GRBs can exceed the total amount of energy radiated by the sun during its lifetime.

This high-intensity burst found by Chinese astronomers occurred at a distance of more than two thousand trillion light years from Earth, a distance so close that it is estimated to occur only once in decades or even a century, the China National Radio report said.

The LHAASO detection has triggered a tremendous international response, with a large number of related studies rapidly underway and discussions about new physical possibilities emerging. At the same time, these measurements will place strong constraints on fundamental physical parameters and models such as the background light field present in the universe, and are expected to yield important cognitive level improvements.

Cao Zhen, chief scientist of LHAASO, led his team to initiate data analysis for the GBR in no time, and has released the preliminary results to the international community via the Gamma-ray Coordinates Network within less than two days of the observation. Further data analysis and scientific studies are being carried out by members of the LHAASO collaborative group.

LHAASO is located in the mountains of the eastern Qinghai-Xizang Plateau at an altitude of 4,410 meters, and is a major part of the national scientific and technological infrastructure to observe and study cosmic rays. The project was launched in 2017 and began its first scientific observation in April 2019.